A flock of robins flew into my yard today on an icy-cold gust of wind. There were a dozen or more of these neighborly birds. They gathered around the fishpond in the spot where the water is kept thawed by a small heater and a bubbler - both installed to keep the fish alive. I thought they were rather far north for the time of year. A visit to the Great Backyard Bird Count site revealed that robins are not commonly found at this time, but when they are it's typically in flocks. I was happy to see them because here, as in other parts of the country, the local folk acclaim them the official harbingers of spring. 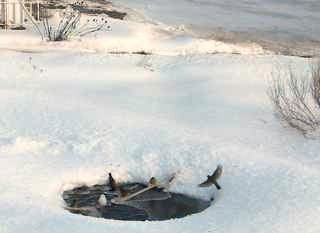 (I tried taking photographs with my point-and-shoot through a not-too-clean kitchen window, but the pond is too far away, so I apologize for the picture quality.) 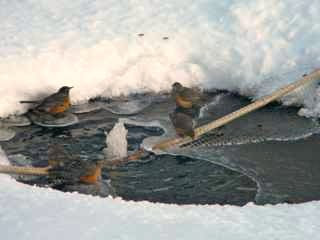 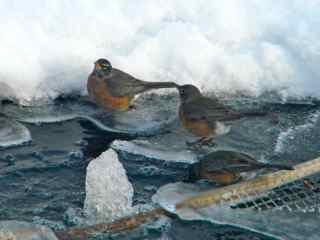 My intrepid visitors soon found the heated birdbath on the back porch. They dominated the dish for a couple of hours, joined occasionally by some of the regular guests.

Of course, the REAL robin is the European Robin, Erithacus rubecula, Britain's National Bird.  This perky little red-breasted European robin is an Old World flycatcher, whereas the American robin belongs to the thrush family. I found a great posting by Charlie on the blogging community '10,000 Birds' about the European robin and the folk laws surrounding it. My family and friends in England know how much I miss the little robin and so they traditionally send me a “robin” card for Christmas.

When the American robins had left my garden this morning, there were still lots of other birds for me to enjoy.


Of course, there were the usual chickadees, dark-eyed juncos, titmice, sparrows, and woodpeckers. There was also a pair of mourning doves, but they didn't stay long enough for me to take their picture. Carolyn of This Grandmother's Garden just did a great posting on mourning doves.

I feel blessed to have so many wonderful birds to brighten my cold, winter days. But maybe spring is not so far away ... if the American robin is to be believed! 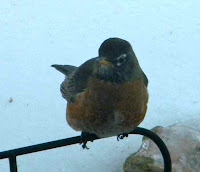 ~~ I love reading your comments. I hope you leave one so I’ll know you visited!
I look forward to visiting your blog in return.
Posted by Pam's English Garden at 2:29 PM