Four Plants I Love to Hate 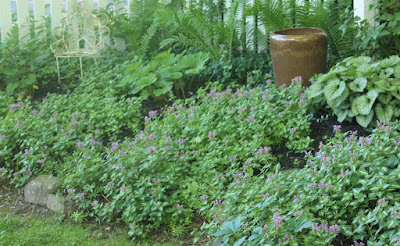 I wrote an article for the Pocono Record about invasive plant species back in June of 2015. (Yes, the newspaper has published my monthly gardening feature for nearly four years now.) You can read that piece HERE. I explain how 'invasive' and 'aggressive' are not the same.  Aggressive plants grow fast and spread, but don't outgrow and overcome other plants as invaders do. I planted some when I started my gardens because I knew they would spread quickly; I'm embarrassed to admit that I wanted instant gratification. They say that with age comes wisdom, but it's a bit late now; I'm having difficulty eradicating some of these aggressive types. While I may love them, I find their bullying attitude extremely annoying.  Here are four in particular with which I have a love/hate relationship:

Lamium
The first garden I made at Astolat, in 2005, is the one that I call 'Serenity.' Back then, it was in a great deal of shade. I read that lamium, a tough yet showy perennial groundcover,  was one of the best choices for shady areas. It has green and cream leaves and pretty pink or purple flowers that bloom in spring. The three or four plants that I put in that area quickly spread and became the expanded carpet you can see in the picture at the beginning of this posting.


The stems of lamium root in the ground where they touch. It is not difficult to pull them out, however, and new plants can be moved easily. I often add them to planters -- a great money-saver. At the end of the season I reduce the number of plants in each bed quite drastically; I cut back the remaining ones in the spring. I remove any that are encroaching on other perennials throughout the season. As I said, they are annoying thugs.


Gooseneck Loosestrife
I fell in love with gooseneck loosestrife when vising a homeowner's garden while on an open-gate garden tour. I especially loved how it attracted pollinators. I purchased just two plants: one for the cottage garden and one for the circular bed that later became the Horseshoe Garden. The two plants spread rapidly by underground roots, particularly in the round garden that was constructed with layers of organic matter in the lasagna method. Eventually, I had the plants removed, with great difficulty, from that bed. You can read how this task was accomplished HERE. I kept the stand of gooseneck loosestrife in the cottage garden, being careful not to encourage its growth by adding compost.


I enjoy the mass of white flowers in the summer. They provide rest for the eyes from the colors of the traditional cottage garden plants. I spend time, however, pulling out those that invade the space of others.

Morning Glory
Morning glory is a beautiful annual vine that will rapidly cover a trellis with its heart-shaped leaves and pretty, trumpet-like flowers. Gardeners who grow this plant know that it will freely seed all over your garden if allowed. As a result, one of the most time-consuming tasks is deadheading. When the flowers close in the afternoon, if not removed, they are replaced by berries filled with seeds. The mature berries fall to the ground where the seeds take root. I've found, to my cost, that as a result morning glory vines can take over the garden if left to reproduce at will.


This season I neglected the deadheading task due to travel and weather. I know this means that next spring I will need to look for the numerous seedlings that will pop up, and must pull out as many as possible.  More work than I want.

But morning glory vines are beautiful ... 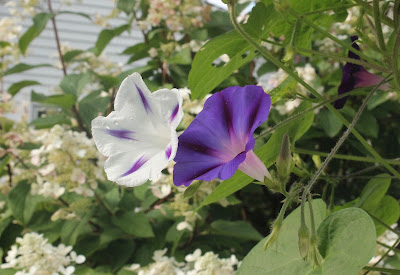 Vinca Vine
I'm not so enamored with vinca vine although it is a  classy-looking evergreen groundcover with sweet blue flowers that bloom in spring.  Vinca minor and vinca major should not be confused with annual vinca that is not a vine. This last season, because of favorable weather, I think, my vinca vine spread more rapidly than usual and began to effect other flowers in the border. It began to crowd-out my beautiful hyssop and some miniature roses, greatly reducing them. When I tried to pull some of the vinca out, I found the roots too firmly attached. (It doesn't help that I am losing upper-body strength as I age.)


I feel guilty for wanting to remove this thug because it was planted by my mother-in-law before the garden was mine. She loved her 'periwinkle' and wouldn't understand me trying to eradicate it. As an organic gardener, I wont use chemicals. I'm considering using the solarization method next year.  I'll let you know how that works out.

I wouldn't recommend any of these four plants to new gardeners. I planted the first three many years ago before I knew anything about gardening in America. There are better behaved alternatives, requiring less upkeep, that I will be glad to suggest to anyone who would like to know.

Do you have a love/hate relationship with any of your plants?

I love reading your comments. I hope you leave one so I’ll know you visited!
I look forward to visiting your blog in return.
Posted by Pam's English Garden at 9:43 PM 17 comments:

Evaluating the 2018 Kitchen and Cutting Gardens 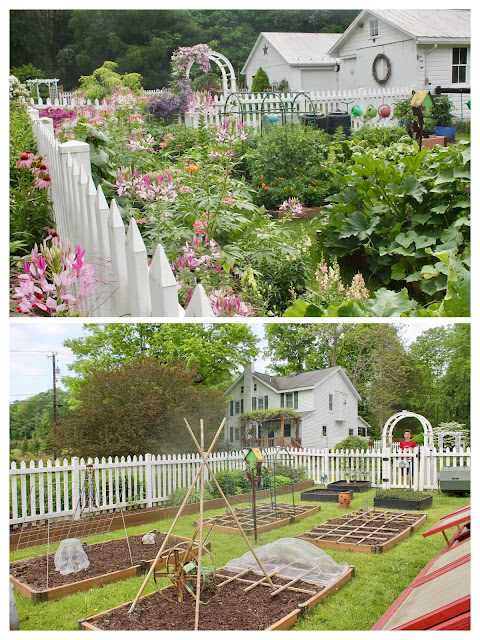 It's never too early to start dreaming; to start planning for the next gardening season. First, however, it helps to assess the previous year's successes and failures. I evaluate each year's vegetable crop for flavor, disease resistance, and performance. I determine which varieties we liked and which failed. I assess flowers for their visual appeal and impact, considering their color interest, texture, and unique features. This isn't as big a job as it sounds because from year to year I tend to repeat the tried and true, with just a few new varieties. There are unexpected failures and successes, however, that are often weather related. This summer's record rainfall and numerous violent storms were enormously challenging. As a result, I spent far less time on maintenance than usual. The gardens quickly became a jungle. You can see the rapid growth in the two pictures above: The bottom photograph, taken at the end of May, shows grandson, Jonathan, admiring the neat beds after we had sowed peas, beets, pole beans, bush beans, zucchini, cucumber, parsnips, carrots, cosmos, and nasturtium. I captured the top picture only 81/2 weeks later. This annual miracle never ceases to amaze me. We followed the plan I developed back in March; you can read about it HERE. When Jon and I had finished the direct sowing, I planted the peppers, tomatoes, zinnias, marigolds, and snapdragons that I had started indoors from seeds.  Row covers protect cabbage, kale, and broccoli from insect damage. In the cold frame, I started Swiss chard and lettuce. We anxiously awaited all the seeds to germinate and the seedlings to develop.


Today, the combination kitchen and cutting gardens are a tangled mess. I dodged raindrops to take the following picture this morning: 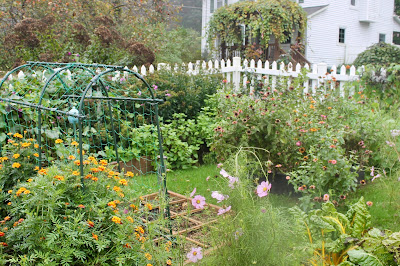 Here are some of this year's vegetables that performed well:


For the third successive season, I had little success with tomatoes - they were too soft and watery. Three strikes and they are out. I decided against growing any next year as I can't justify the amount of work involved. Likewise, the peppers were disappointing. We didn't like the texture and flavor of the pole beans, but loved the bush variety. I plan to purchase 'Rattlesnake' pole beans next year. Of the many I've grown over the years, it's delicious and is very interesting visually.


We are expecting our first frost this week. Then I will begin harvesting the parsnips. You have probably heard me say that they taste so much better after being touched with frost.


The cutting-garden flowers suffered from the dreadful wet, stormy weather, plus it was often too wet, too hot, or too humid for me to spend time outdoors deadheading. The late cosmos are still blooming, although mostly blown flat to the ground. The zinnias are fading fast; the first frost will finish them all.


I have some brassica plants for the cold frame, as I hope to extend the season. Unfortunately, the heavy rain found its way into the back of the cold frame making the soil too wet for planting. I need to contact my handyman for help. Maybe a gutter under the eaves ...


I feel my kitchen garden and my cutting garden were less successful than usual this year. By making an honest evaluation I am able to plan for the next garden season. I know it will be much better! Don't you agree?

I am linking to Garden Bloggers' Bloom Day even though it was too wet to take pictures of today's flowers for the meme. I look forward to visiting Carol's wonderful blog, May Dreams Gardens, to see what is blooming around the world on this Bloom Day.


I love reading your comments. I hope you leave one so I’ll know you visited!
I look forward to visiting your blog in return.
Posted by Pam's English Garden at 9:40 PM 30 comments:
Newer Posts Older Posts Home
Subscribe to: Posts (Atom)