Is the Love of Gardening Genetic? 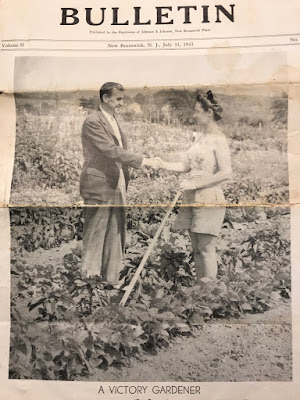 The beautiful gardener in this newspaper picture was my husband's mother, Constance. During the Second World War, while my father-in-law was deployed in the army, she planted a victory garden. Along with nearly 20 million Americans, Connie answered the government's call to grow vegetables to increase food production. The victory garden was a practical way to contribute to the war effort. At the time, she lived in New Brunswick, New Jersey, where she worked for Johnson and Johnson. The company published the picture on the cover of their Bulletin and wrote a brief article commending her. They said, 'Her Victory Garden is miraculously free of weeds because of her constant and excellent care.'

Connie was raised on a farm; after the war, she purchased Astolat Farm where her children were born and where H.H. and I live to this day. She continued growing a vegetable garden into her 80's, riding the big field tractor to cultivate between the rows. She never would let H.H. drive it since he drove over her seedlings when he was very young. As she aged, we became increasingly afraid she would fall off, so finally, H.H. removed the wire to the tractor coil, so that it wouldn't start for her.

During the Second World War, in England, my mother contributed to the war effort by becoming a land girl. The Women's Land Army was a British civilian organization that the government created so women could replace field hands in agriculture when the men were called up to the military. My mother was placed with a farm that needed workers. I have no idea who the boy was in the picture; maybe he was the farmer's son.


My mother credits her love of plants to her parents. My grandfather grew prize-winning vegetables, while my grandmother loved the flowers in her cottage garden. She grew lupines, delphiniums, and many of the cottage garden plants I grow today.

When she was an 'old age pensioner', my grandmother moved to a small bungalow for the elderly. She continued growing her flower garden until she died. Her obituary stated, 'Always fond of an active life, she was a keen gardener, and in 1956 and 1957 she won first and second prizes respectively in best kept gardens competitions.'

(On the certificate her home is described as occupied by an old person. She was 65 at the time, so I believe that makes this gardener a very old person?)

My mother continued the gardening tradition. I wrote about her gardens HERE. and HERE.

(The garden ornament was from Jo who blogs at Through the Keyhole.
Jo offers lots of giveaways and I was the lucky one that time.)


The garden looked somewhat different when my dad was alive. He had a greenhouse that he built himself from used window panes.

(It's difficult to see in the picture, but my mother collected gnomes -- an English trait.)

My Dad added a gutter for rainwater; it rained often. He propped open part of the roof with a stick when it was too hot. Dad was very proud of the tomatoes he grew in his greenhouse; the climate wasn't hot enough to grow them outside. I must say, they tasted pretty good for hothouse tomatoes, but you can't beat those grown in my sunny garden -- I never told him that. 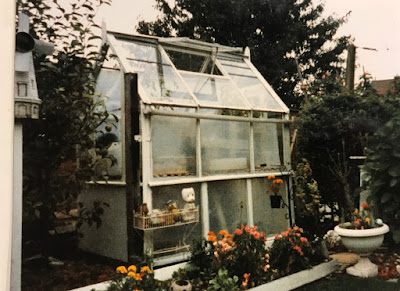 As well as tomatoes and other vegetables, my dad grew roses. They were fabulous.


My question is this: Is a love of gardening genetic? I believe it is. I've always felt my passion came from my parents and grandparents. I've passed it to one of my grandsons. But the gardening gene seems to have missed my husband, although he is very willing to help with any gardening task I ask of him. His sister, however, is a home gardener.

There was an interesting discussion among some of the RHS community in England on this topic. Some believe the gardening gene can be passed on, although of course there is no scientific evidence. Others believe it is 'social engineering' -- modeled behavior. What do you think?

Genetic or not, I'm glad I've got the gardening bug. 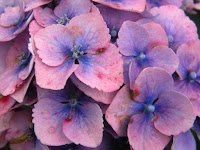 I love reading your comments. I hope you leave one so I’ll know you visited!
I look forward to visiting your blog in return.
Posted by Pam's English Garden at 1:54 PM 24 comments:

Counting the Winter Birds in My Backyard 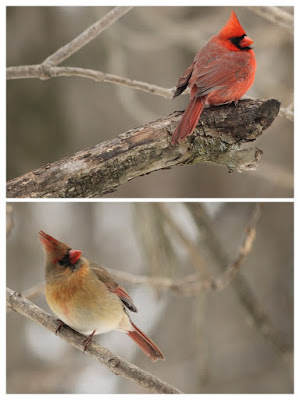 Anybody can take part in the Great Backyard Bird Count (GBBC.) It's free. It's fun. Every year I mark my calendar for this four-day event in February. Birdwatchers around the world count for as little as 15 minutes a day for one or more days then report the sightings online at birdcount.org. Led by Cornell Lab. of Ornithology, the National Audubon Society, and many international partners, the purpose of this citizen-science project is to provide a snapshot of the distribution and abundance of wildbirds around the world in real time. Scientists use this information to answer questions like, "How will the weather and climate change influence bird populations?" and "How are bird diseases, such as West Nile virus, affecting birds in different regions?" More than 160,000 people of all ages and all walks of life participate. The 2018 GBBC takes place from Friday, February 16 through Monday, February 19 and I'm ready -- well, nearly ready, I just have to clean the French windows where I stand to count (I'm waiting for the temperature to go above freezing tomorrow before doing this task.)

The French windows in the garden room are framed by branches from the old catalpa tree. Birds gather there to take turn visiting the bird feeder that hangs from one of the branches.  Click on the next picture to enlarge it; there are four or five birds waiting there:


One of the catalpa's larger branches is perfectly placed for my bird photography. Unfortunately, this old branch is dying; it will fall one of these days, so we are careful not to walk beneath it. I will be so sad when it is gone because it enables me to get some great shots.


The bird feeder hangs from this same branch. It looks like a cheery, red barn. H.H. keeps the feeder full of sunflower seeds that attract many species of birds.


Below the tree, on the back porch, there is a water dish containing a small heater that prevents the water from freezing in the Pocono's subfreezing temperatures of winter. This is another of H.H.'s projects: he keeps it clean and topped with water. The heated water dish attracts all sorts of birds and other wildlife. My favorites are the bluebirds, but we have seen very few this season. I'm not sure if the bluebirds' decline is caused by lower-than-usual temperatures, the proliferation of house sparrows, or some other reason. The GBBC study may shed some light on this problem. I hope the bluebirds  return in the spring.


In addition to the seed feeder, H.H. hangs a suet feeder on the deck. This is for the woodpeckers. We see several species in our garden but the most frequent visitors are the red-bellied and the downy woodpeckers. 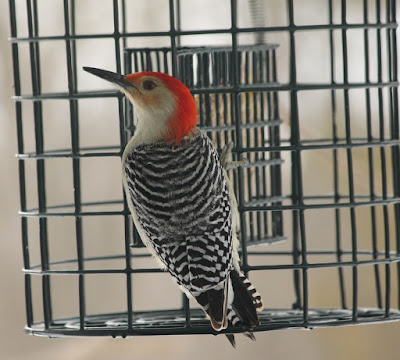 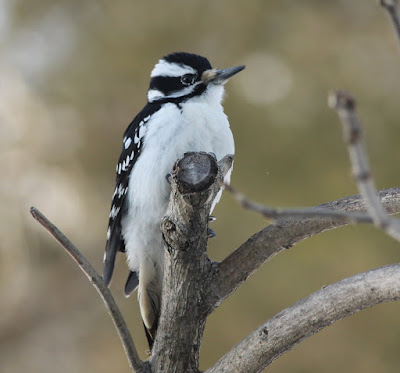 Providing food, water, and shelter are ways to attract birds to the yard. Unfortunately, they draw less desirable wildlife, especially my adversary, the grey squirrel. (I don't use that word lightly -- did you know, The Adversary -- uppercase A -- means the Devil? Very appropriate.) The bird feeder is supposed to be squirrel-proof, but they know how to get at the seeds. They even remove the roof sometimes and climb right inside. 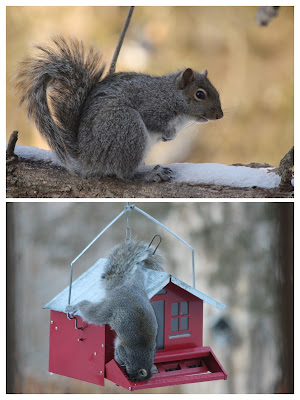 Not even the blue jay, with all it's squawking, scares away the squirrel.

In spite of the squirrels, the birds continue to return to my yard.

To take part in the bird count, simply tally the numbers and types of birds you see, noting the time you watched. You can count from any location for as long as you wish. All the information you need to get started is on the website HERE. I do hope you join the fun! 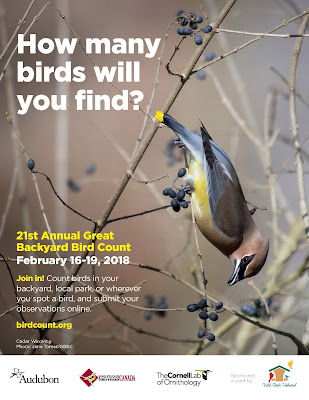 How many birds will you count?

I love reading your comments. I hope you leave one so I’ll know you visited!
I look forward to visiting your blog in return.
Posted by Pam's English Garden at 10:00 AM 26 comments:
Newer Posts Older Posts Home
Subscribe to: Posts (Atom)