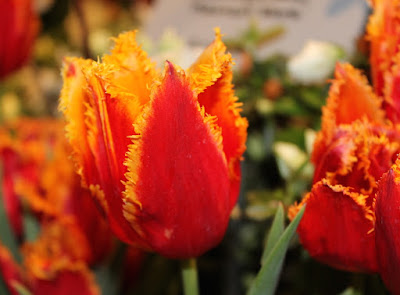 "Holland: Flowering the World," the theme of this year's Philadelphia Flower Show presented by the Pennsylvania Horticultural Society (PHS), celebrates the beauty, color, and ingenuity of Dutch culture. H.H. and I took the train into the city -- later in the week than intended due to winter storm, Stella, dumping two feet of snow at our house -- and it was wonderful to escape from snow, ice and bitter cold into a world of spring flowers. As we entered the show, we were welcomed by a display of 30,000 blooms surrounding bridges, canals and water gardens. The bridges were overflowing with flower boxes and hanging baskets. The sight filled me with awe.


We were met by our dear friend, and fellow Brit, Jenny Rose Carey, who is the senior director at PHS Meadowbrook Farm. She is justifiably proud of the fabulous Entry Garden and the part she played in its production.  I looked forward to taking a tour of the show with Jenny Rose as guide.


Passing under the bridge we found 6,000 more blooms forming a giant floral canopy. The blooms were freeze dried then suspended on 16 miles of parachute string. (As Jenny Rose said, it's a good thing the lines of string didn't become tangled while being installed.) With the addition of Euro pop music and a light-show, the effect is stunning.


The surrounding gardens demonstrate the natural and sustainable approach of the Dutch New Wave Movement. I love the drifts of mass plantings: astilbe, echinacea, fritallaria, lamb's ears, and other perennials; this is the style I try to achieve in my cottage garden. Wild grasses, cherry trees and sycamores enhance the scene. I believe this method is the very best way to garden, with the added benefits of no mulching nor weeding.


Beyond the PHS's entry garden, the Ecodome is all about green living. It showcases up-to-date sustainable production of vegetables and green technologies, proving the Dutch have more than just tulips in their horticultural arsenal. This is the first stop of the Ecodome's inaugural journey around the world.


I always enjoy the landscape design gardens at each show and this year promises to be special with guest designers from Holland as well as our own top competitors in the field. A local PA landscaper, Mark Cook, was awarded Best of Show with his 'Inner Waters' design. He shows a beautiful reflecting pool with raised berms. I love his stylized windmill sculpture seen through an espaliered cherry tree arch. I also like the way he pruned boxwood into waves.


Jenny Rose's favorite is Nico Wising's design. I'm sorry to say I did not do this justice with my camera. Wising uses natural materials: woven willow and naturalistic plantings (such as fothergilla, that I don't grow, but is now on my 'must get' list). He stresses the importance of using products with a small ecological footprint.


I have an aversion to chain-link fencing and wont have it in my garden -- until I saw how Carrie Preston, also from Holland, incorporated lacework into her fence. Her show garden is an interpretation of the 'stinze' gardens of the Netherlands' stately homes.


At the opening ceremony, the Dutch Ambassador presented a new tulip from Holland that took 15 years to develop. It was named 'Philly Belle' in honor of the show.


Cognizant of the common colors of the US flag and the Dutch flag, white tulips were dyed blue to add to red ones and white ones.


There are several examples of sustainable roof gardens at the show. The most impressive is Bart Hoes' garden. Jenny Rose showed us how green roofs are made.


The bicycle culture of Holland is represented in many displays. In 1967, a Dutch group introduced legislation for their White Bike Plan, creating a bike-share movement that spread throughout the world. The orange and white of this display is very striking. Incidentally, there is a lot of orange in the show: Jenny reminded me of the Dutch Prince William of Orange who became King William III of England in the sixteen hundreds. (Something we had to learn in school.)


Here are a few other favorite of mine:


There is much to interest children including interactive and educational exhibits such as 'Butterflies Alive' with more than 1,000 butterflies, a 'Make and Take' crafts area, a railway garden, and a Junior Flower Show. The latter engages children throughout the region from preschool to high school during the school year. Because I conduct workshops (and write) about gardening with children, I was especially interested in some of the show gardens designed by students. As gardeners, we know how important it is to start them young!


And finally a 'new favorite' plant I spotted in a rock garden that was designed by a Dutch grower based in England. Sorry I didn't get the name of the cultivar.


There is so much at the Philadelphia Flower Show, a great deal more than in this posting. I am so glad I am able to attend each year; I think 2017 is my favorite so far. It was extra special because I was able to spend time with a good friend. I can't close without congratulating her on her new book, Glorious Shade, that will be released in April. Jenny Rose showed us the author copy and it looks amazing. The book is available on Amazon for pre-order.  When I get my copy, I'll review it in a blog post.


I look forward to next year's event: it has the theme "Wonders of Water" so I'll be able to pursue my interest in water gardens. The Philadelphia Flower Show always puts me in the mood for spring and this one was no exception!


This year's theme at the Lehigh Valley Flower and Garden Show was  'Gardens of the World.'  My favorite was 'Lithuania' compiled by Parkland Nurseries. I was immediately drawn to the profusion of white birch in their display. White birch is common to Lithuania and other parts of Europe including my homeland. I felt nostalgic for England and for the tree we recently lost in a Pennsylvanian ice storm. (Click here and scroll to the bottom for pictures.) I loved the plant markers made from rings of white birch, such as the one below naming the glorious fragrant shrub, Korean spice vibernum.


I spoke with landscape architect, Stacey Nash, who told me her mother and other family members came here from Lithuania after the Second World War. Stacey and her team displayed information about the country on posters and on a table. Next to a beautiful doll in national dress, was a pot of rue, the herb of grace, a species native to Lithuania.

After our trip to Lithuania, we walked through gardens of the United  States, Brazil, Switzerland, Canada, United Kingdom, Norway and Holland. Unfortunately, although the company names were very evident, I couldn't always tell which country a display depicted. The United Kingdom was evident by a replica of Stonehenge, and the United States by Mount Rushmore. The UK showed an abundance of red, white and blue flowers, but most striking was an arrangement of pink roses on the patio table.

A variety of evergreen shrubs and trees made a striking background for the gardens of USA.

The most common flowers in every garden were daffodils, tulips, and crocuses.


We saw several corkscrew hazel, sometimes called contorted filbert or Harry Lauder's walking stick. I must put this interesting plant on my wish list. The one pictured below was in the Holland display.


Our day at the flower show was the coldest of this winter with sub-freezing temperatures outside. But the spring blossoms and flowers inside Agricultural Hall were heart warming. This is why I love flower shows so much. Just the smell of earth and mulch lifted my spirits.


Grandson, Jon, wasn't with us this year because he had a rehearsal for a school musical. I took a picture of the trains for him. We missed you, Jon.


We enjoyed looking around the market area and made several purchases, including some pussy willow branches. When this current cold snap and the upcoming snow storm are passed, I plan to force into bloom some flowering branches of forsythia and mock orange. The pussy willow will keep me happy in the interim.

Our last stop was to say hello to some fellow master gardeners from Northhampton County. I belong to Monroe County so I didn't know any of them, but just love talking 'shop' with like-minded plants people. They had an impressive display with suggestions for children's gardening activities, rain barrel information, soil information, and an array of handouts on every gardening topic. I admired the amount of space they were given and the clever way they used it. They were kept very busy answering questions from community gardeners. Some master gardeners and some professionals gave presentations on one of the two stages.


Now I've had a taste of springtime, I can't wait to go to the Philadelphia Flower Show in a few days. That show started yesterday and I'm seeing enticing photographs on Facebook. It is much, much bigger than this one, and we will spend a couple of days there. Hopefully, the Big Storm will be over and the roads cleared before our planned trip. The LV Flower Show is small, but very special because it features local landscapers and vendors. We spent a lovely few hours there.

If you live in the Northeast, stay warm and safe in the storm arriving Tuesday! Think spring!
Pamela x