The cute one-legged sparrow has visited my garden every day for the past three months. He (or she) pecks at the seeds that fall to the ground under the bird feeder, sometimes for hours. The song sparrow, Melospiza melodia, is a common brown sparrow with heavy dark streaks on on its chest coalescing into a central dark spot. The female song sparrow's appearance is the same as the male's, which is why I don't know if my one-legged friend is a 'he' or a 'she.' Sparrows are ground feeders, so it doesn't matter that he can't land on the bird feeder above him. 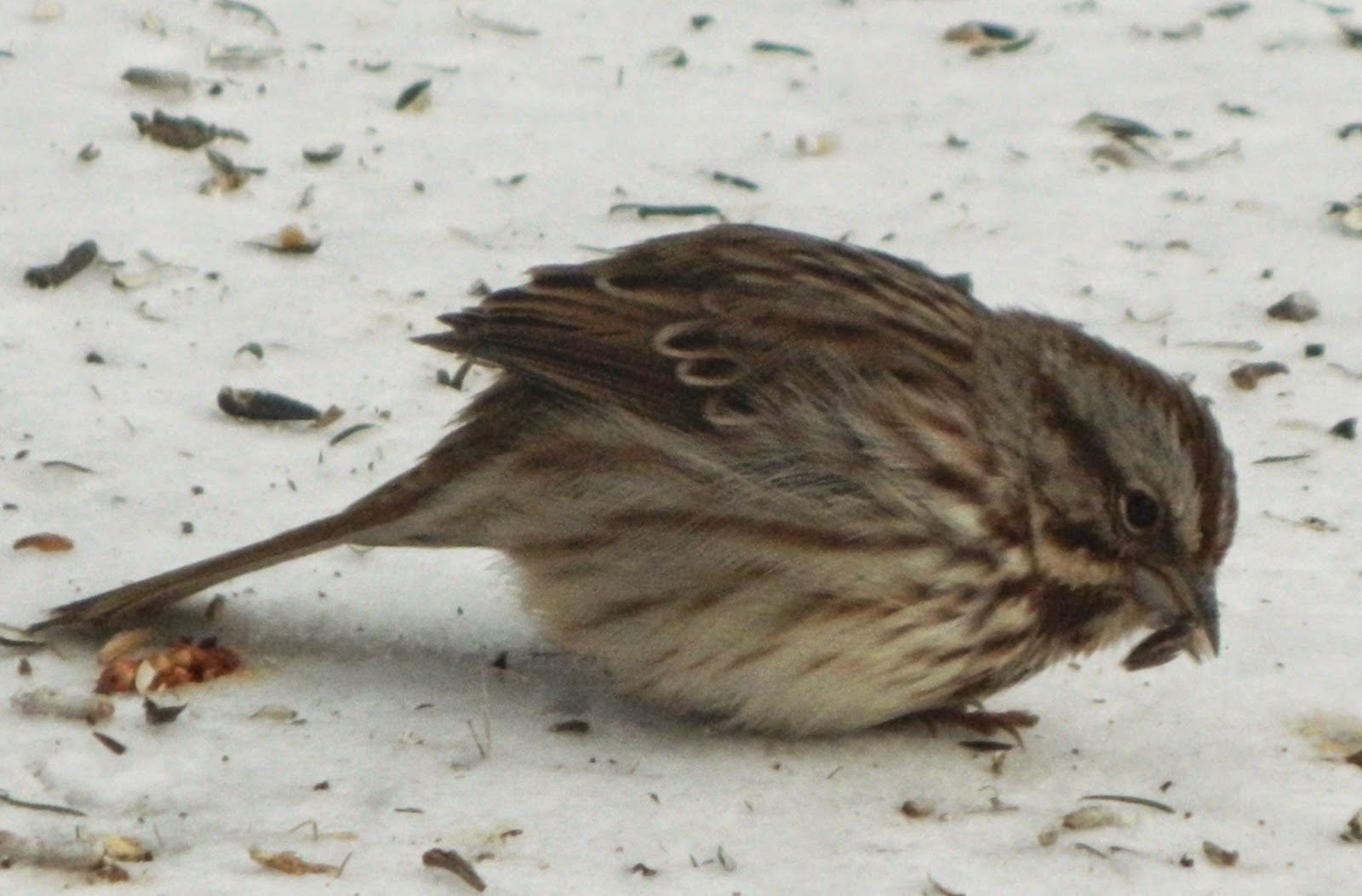 In the winter months H.H. provides a heated water dish near the bird feeder. The one-legged sparrow has no trouble hopping onto the rim for a drink. When the water is at a low level, I sometimes think he will fall in, but he doesn't ... 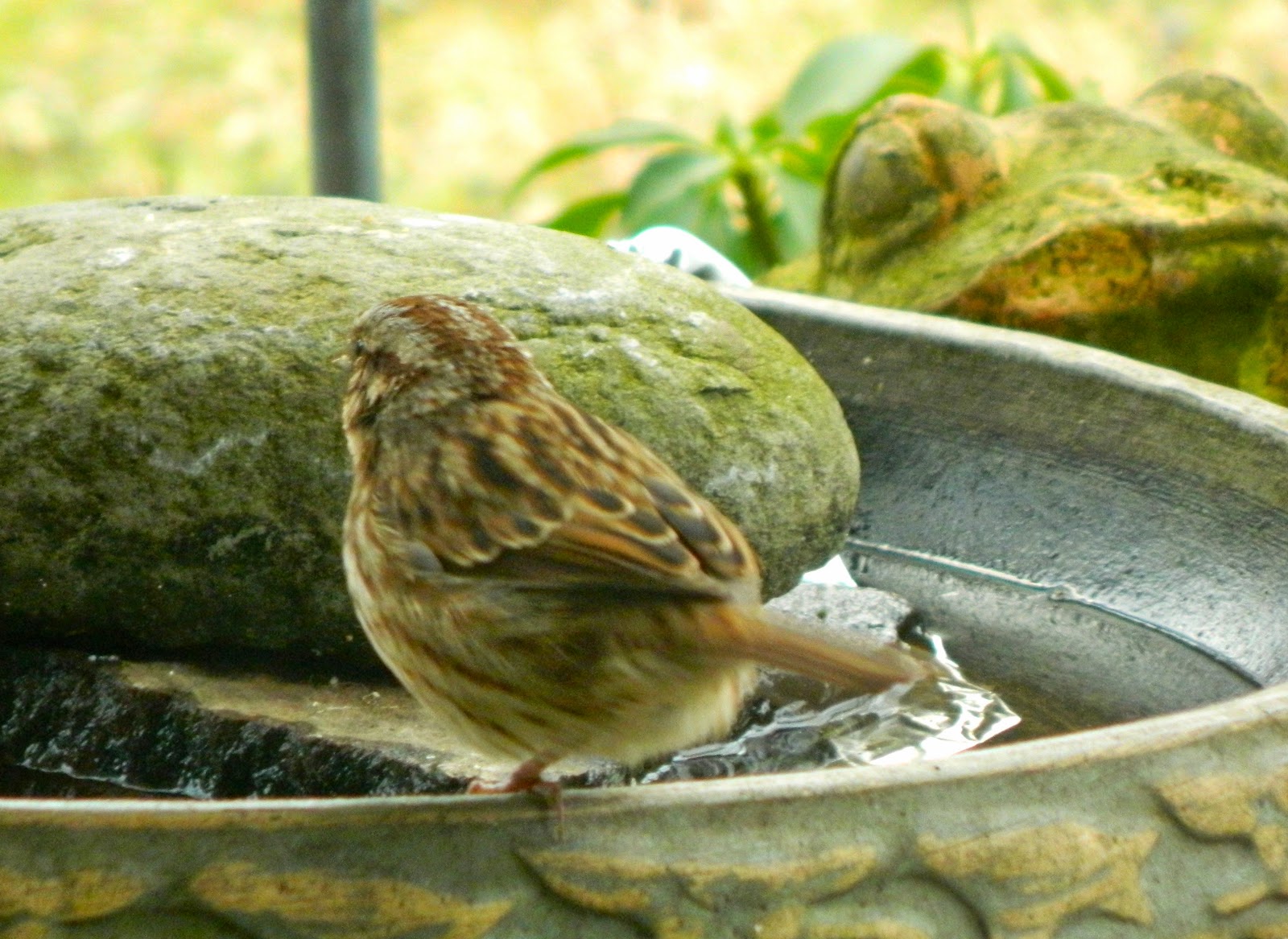 When I made a Google search, I found sparrows with only one leg are not unusual. They are resilient and unfazed by their disability. I hope mine is around for the Bird Count that is taking place from February 13 through 16 this year. Click here for more information.


Launched in 1998 by the Cornell Lab of Ornithology and National Audubon Society, the Great Backyard Bird Count was the first online citizen-science project to collect data on wild birds and to display results in near real-time.
Since then, more than 100,000 people of all ages and walks of life have joined the four-day count each February to create an annual snapshot of the distribution and abundance of birds. -- Cornell University

I urge my gardening friends to join in the count this year. It's simple to do and can be done anywhere in the world.

Some of the birds in my garden this week, in addition to my one-legged sparrow ...


I think the female bluebird, while not such a bright blue as the male, is extremely pretty! Don't you agree?


I bought H.H. a new squirrel-proof bird feeder for Christmas. The nuthatch was the first to check it out.


I love all the birds, but my favorite (today anyway) is the cheeky titmouse. His character always comes through in pictures of him.

As well as the seed feeder and the heated water dish, H.H. also provides suet.


Back to my one-legged visitor: Song sparrows return to the same area each year, defending their small territory by singing from thick shrubs. Their song consists of three short notes followed by a varied trill, sometimes interpreted as Madge-Madge-Madge, put on your teakettle-ettle-ettle. They can live for 5+ years, so I hope my resilient one-legged friend is around for that long.

Time for me to put on my teakettle. A cup of tea in my favorite chair looking out at the birds visiting feeders and water dish: Bliss!


~~ I love reading your comments. I hope you leave one so I’ll know you visited!
I look forward to visiting your blog in return.
Posted by Pam's English Garden at 6:42 AM 22 comments: 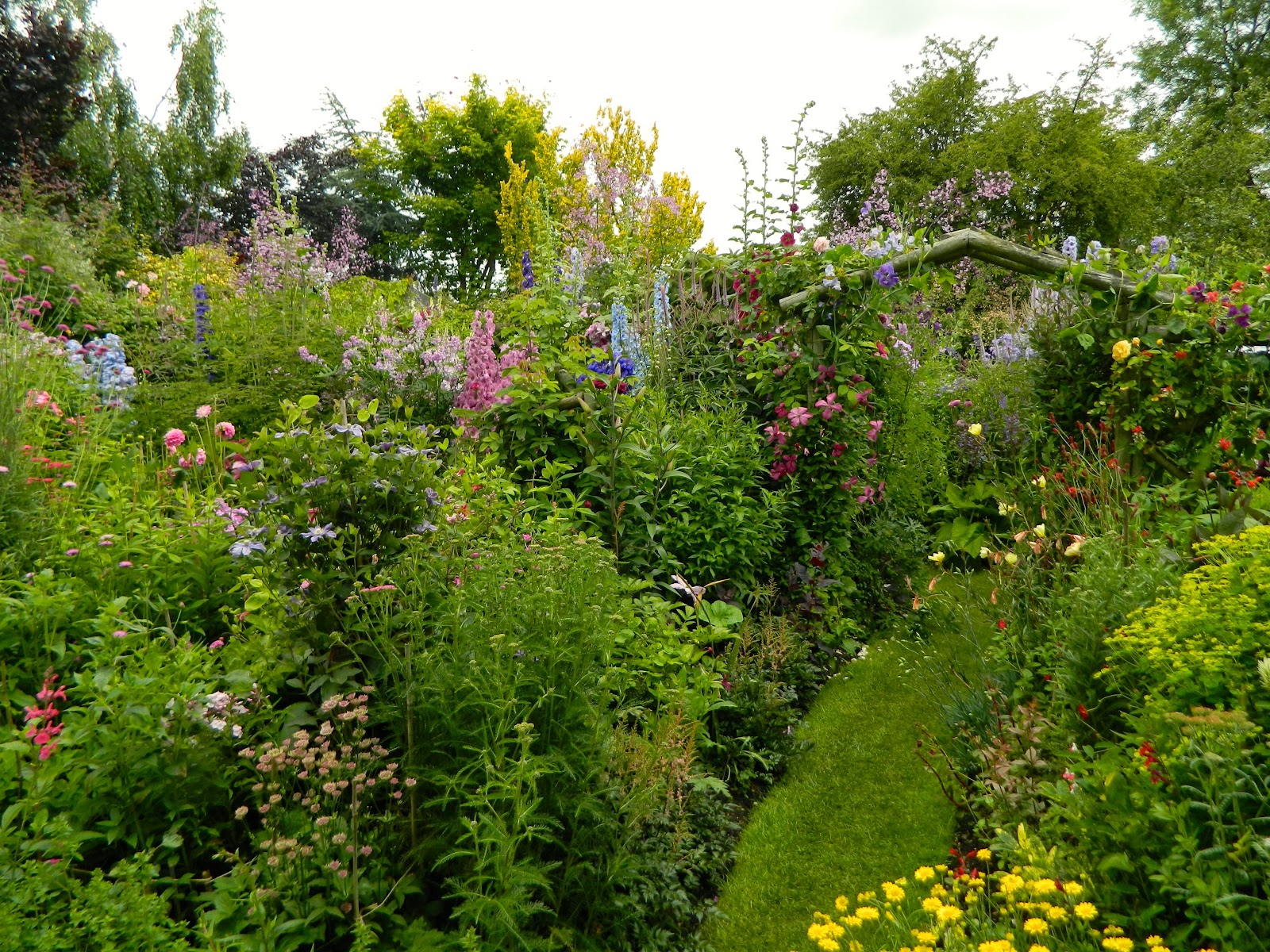 Come with me on a walk through a traditional cottage garden in England. I took these photographs last summer when I visited Grafton Cottage. Ethne Clarke could be writing about Grafton when she says,

Grafton Cottage is owned by Margaret and Peter Hargreaves. I found Peter a charming and welcoming host and Margaret a knowledgeable and passionate plantswoman. I discovered their garden in the National Garden Scheme's The Yellow Book 2014. The National Garden Scheme has been opening gardens to raise money for charity since 1927.  Margaret's and Peter's charity was Alzheimers Research UK, a worthy cause indeed, and I was glad to be in England for one of their openings. This is how the Scheme describes their garden paradise ...

'Step into an English cottage garden and roam around the winding paths clothed with highly scented flowers, old fashioned roses, dianthus, sweet peas, phlox, lilies. The stately delphiniums form a backdrop to the herbaceous borders, over 100 clematis including 30 from the viticella collection. Wander through trellises and amongst campanula, achillea, viola and many more unusual perennials. Textured plants, artemisia, atrepex, heuchera form the basis of colour themed borders. Use of cottage garden annuals add to the tranquility.'

I stepped into their English cottage garden through a white picket gate. 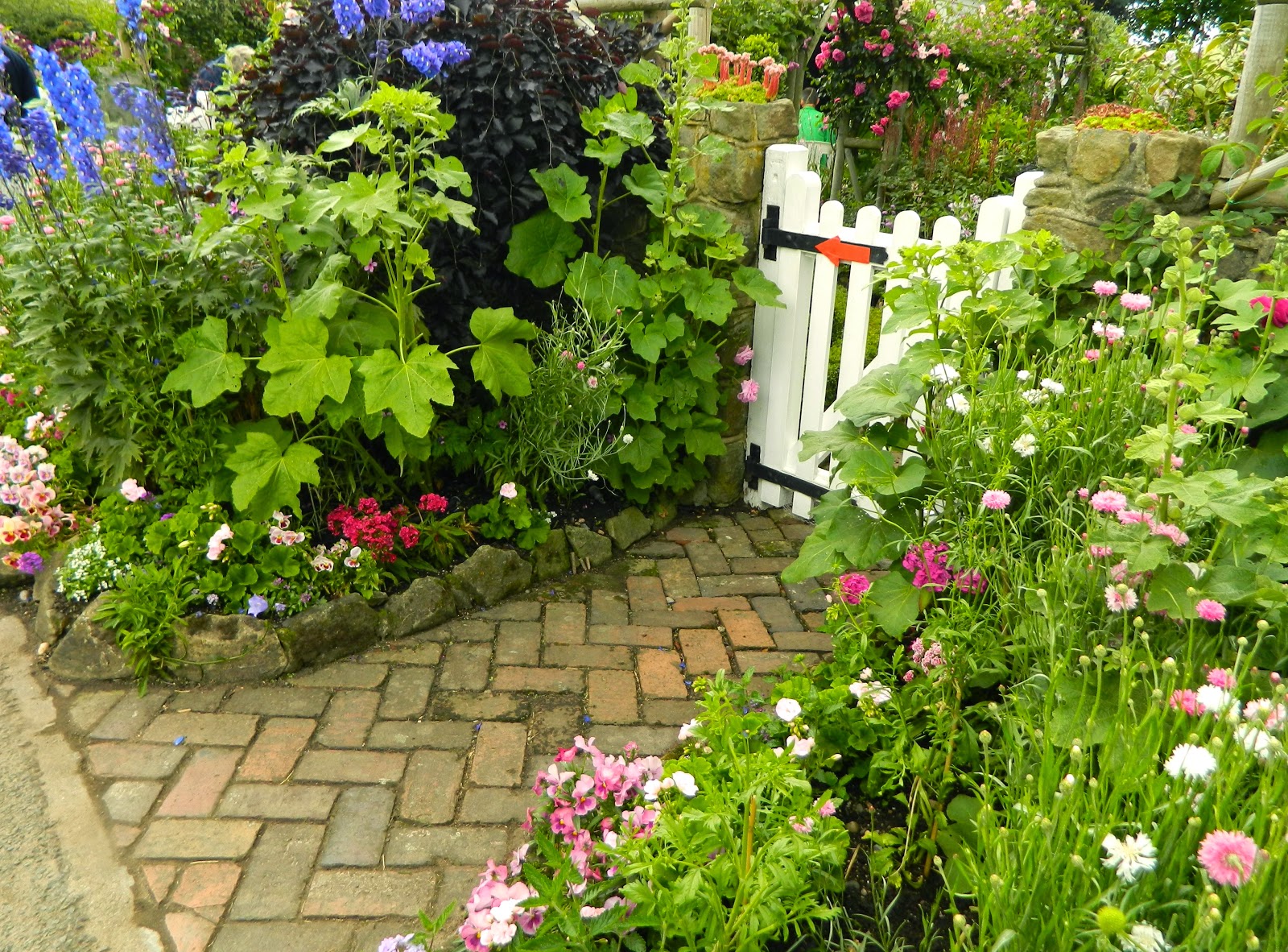 I roamed around winding paths, through rustic arbors, among the wonderful profusion of cottage garden plantings. 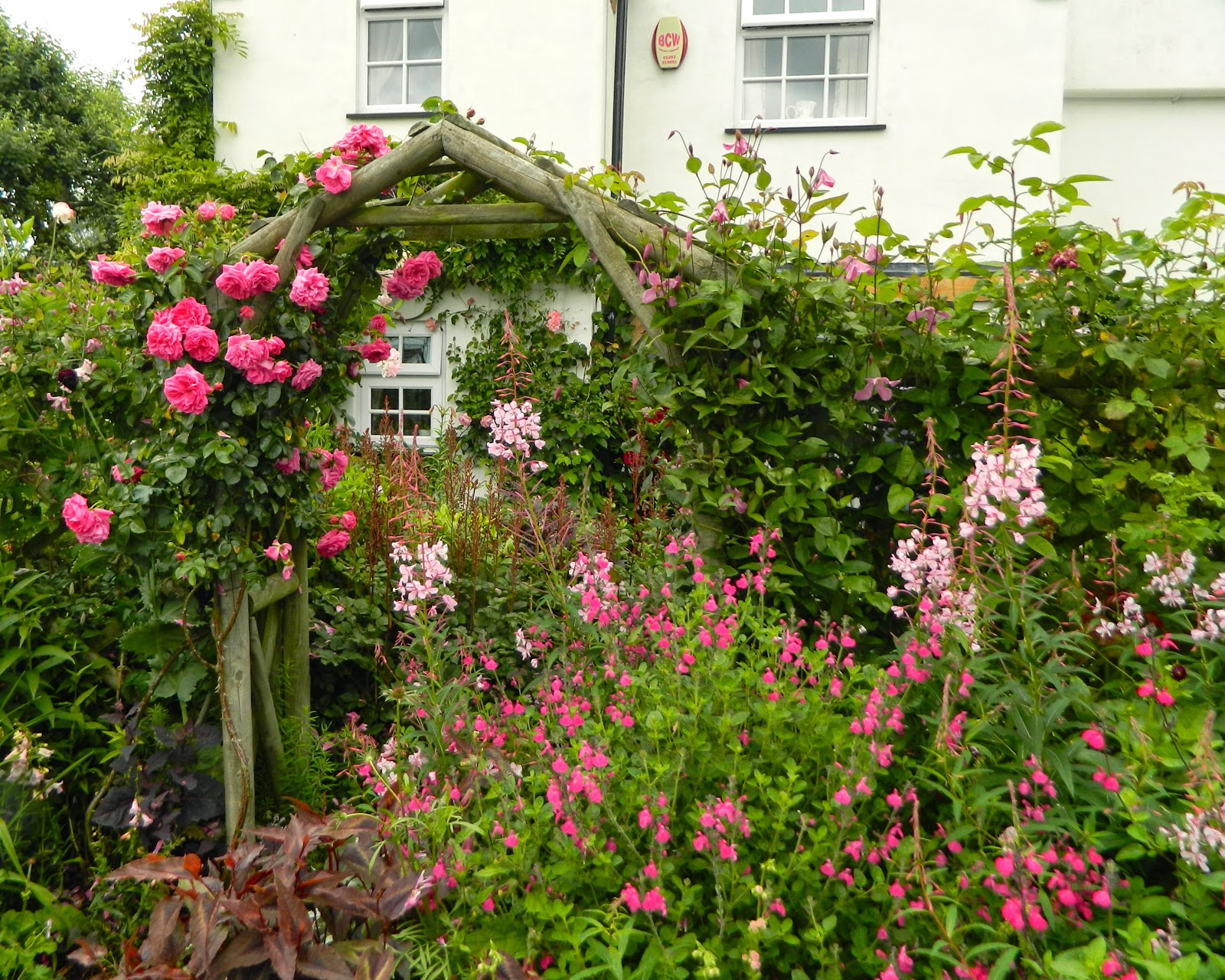 The blue delphiniums were particularly striking ... 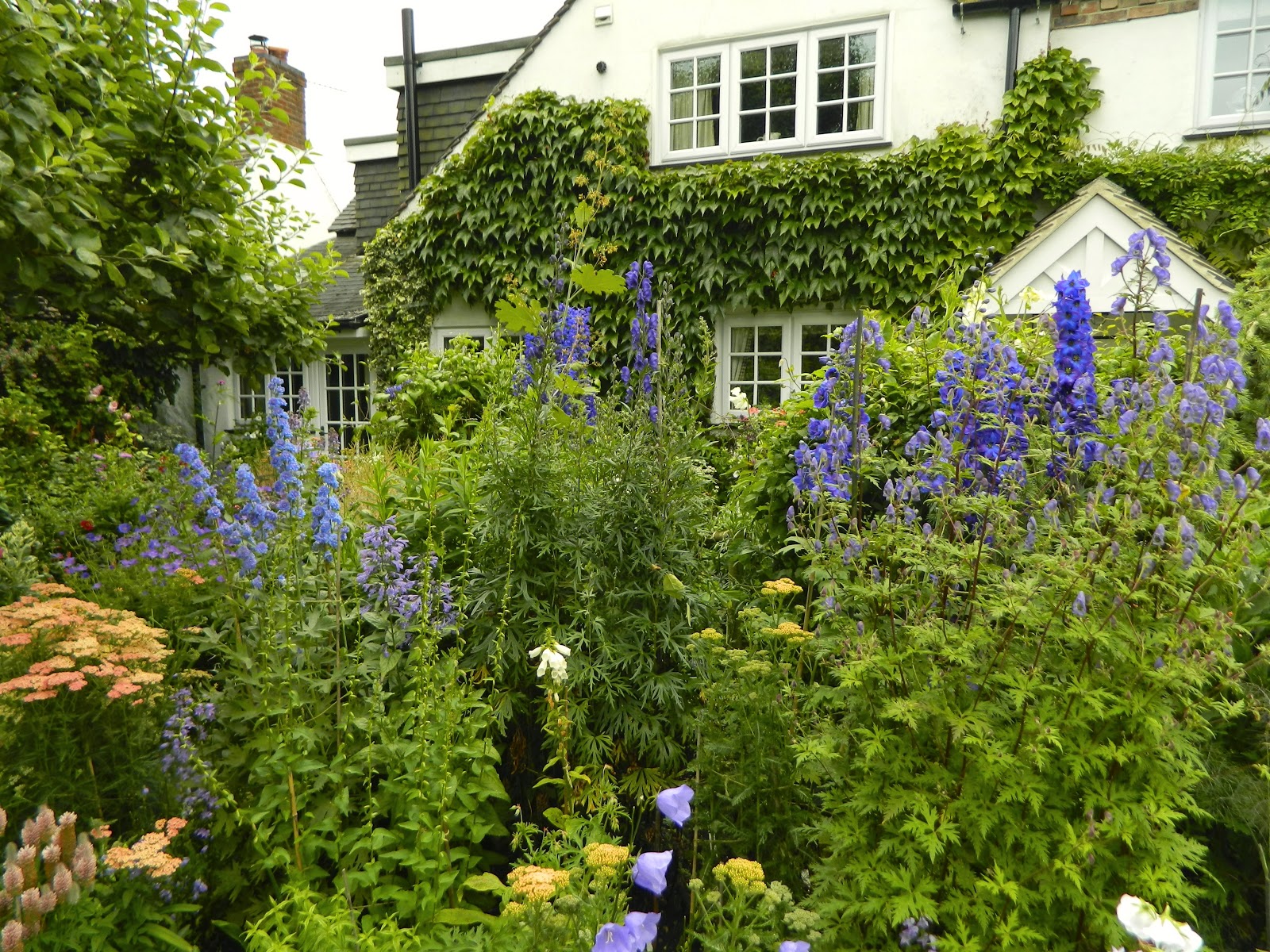 I was interested in the variety of materials used to make paths: various types of bricks and stone, as well as grass, evident as you scroll through these pictures. 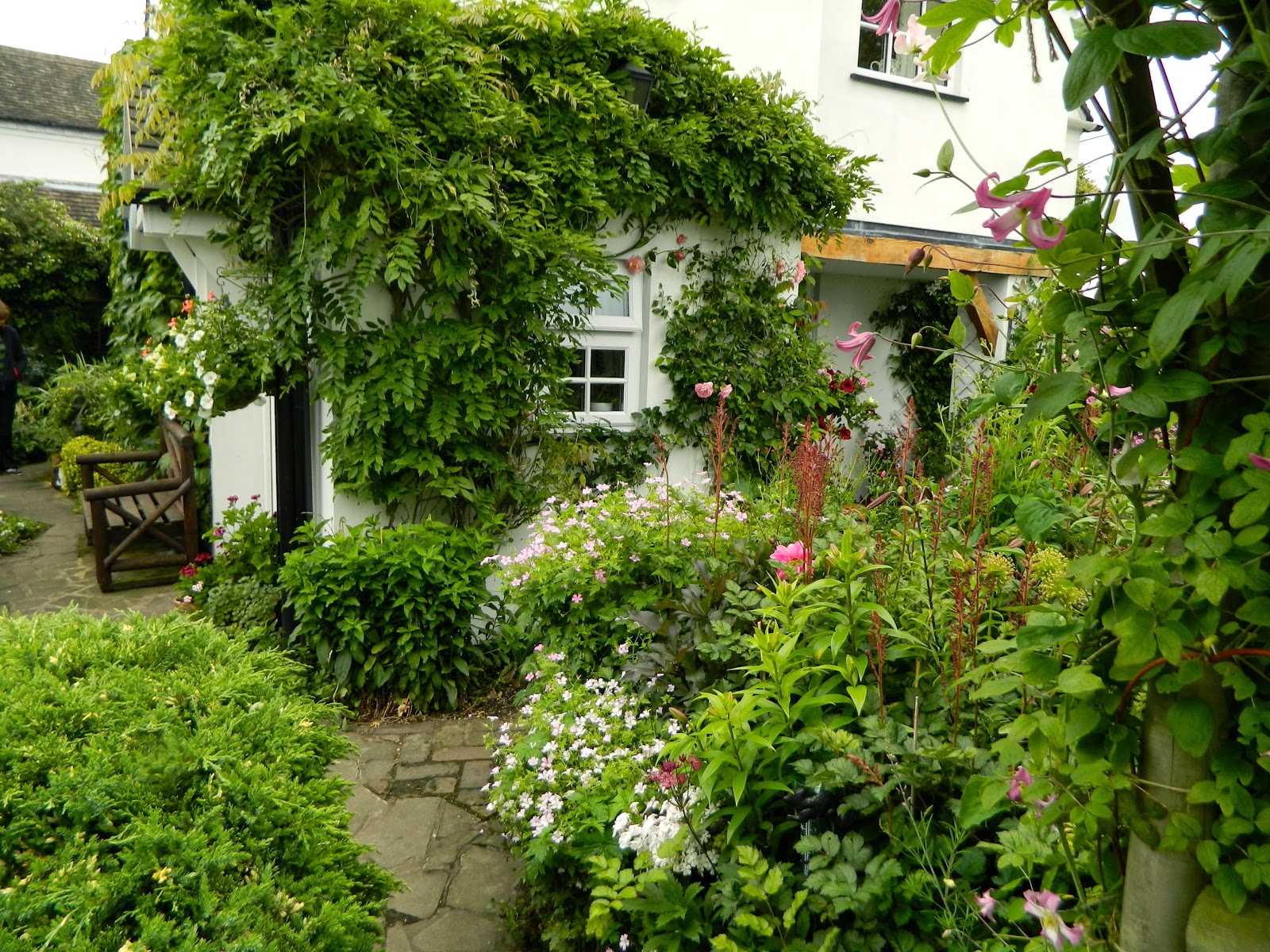 They set up the garage as a pleasant tea room where delicious homemade cream teas were served. Also, there were cottage garden plants for sale. How I wished I could bring some home to America! 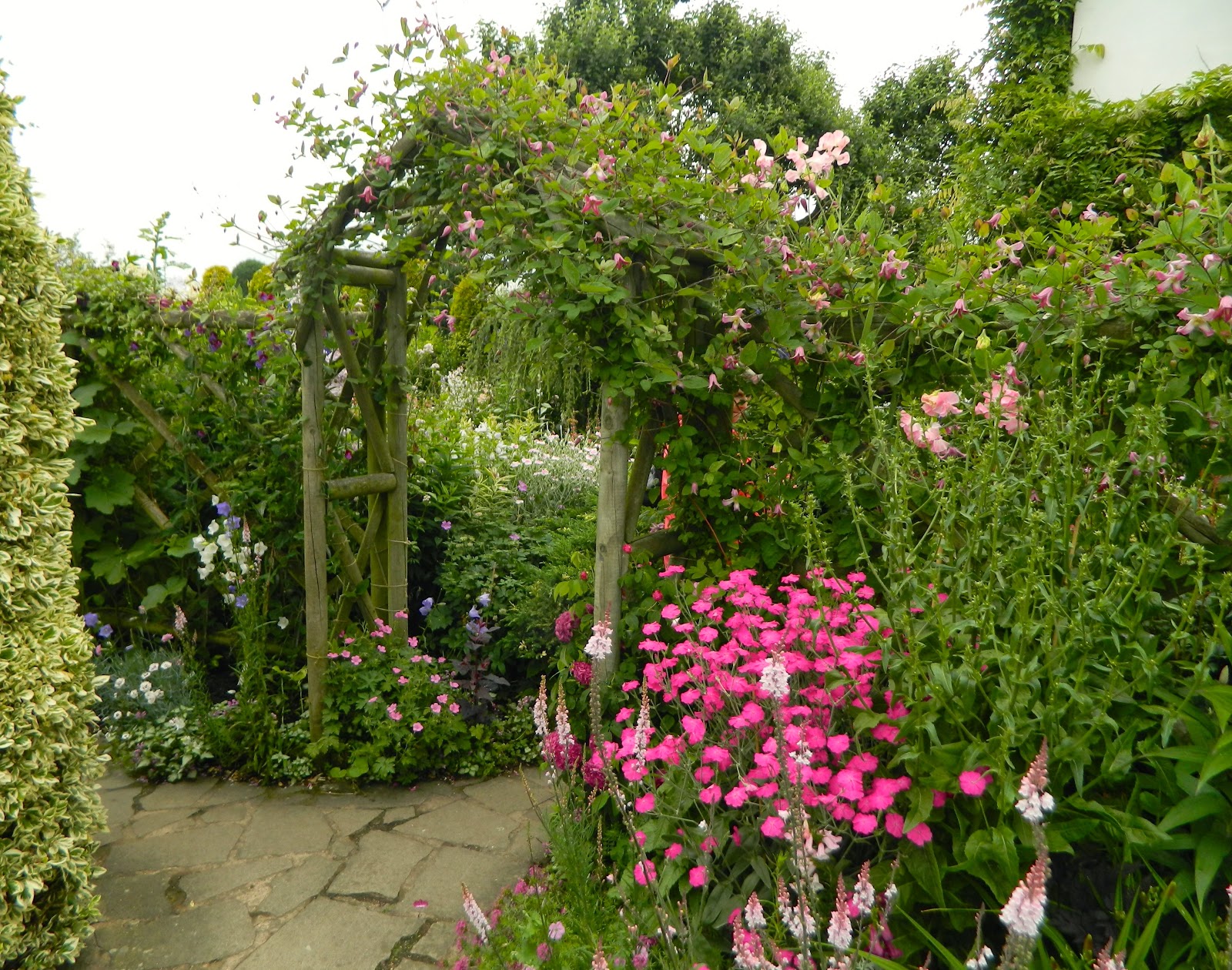 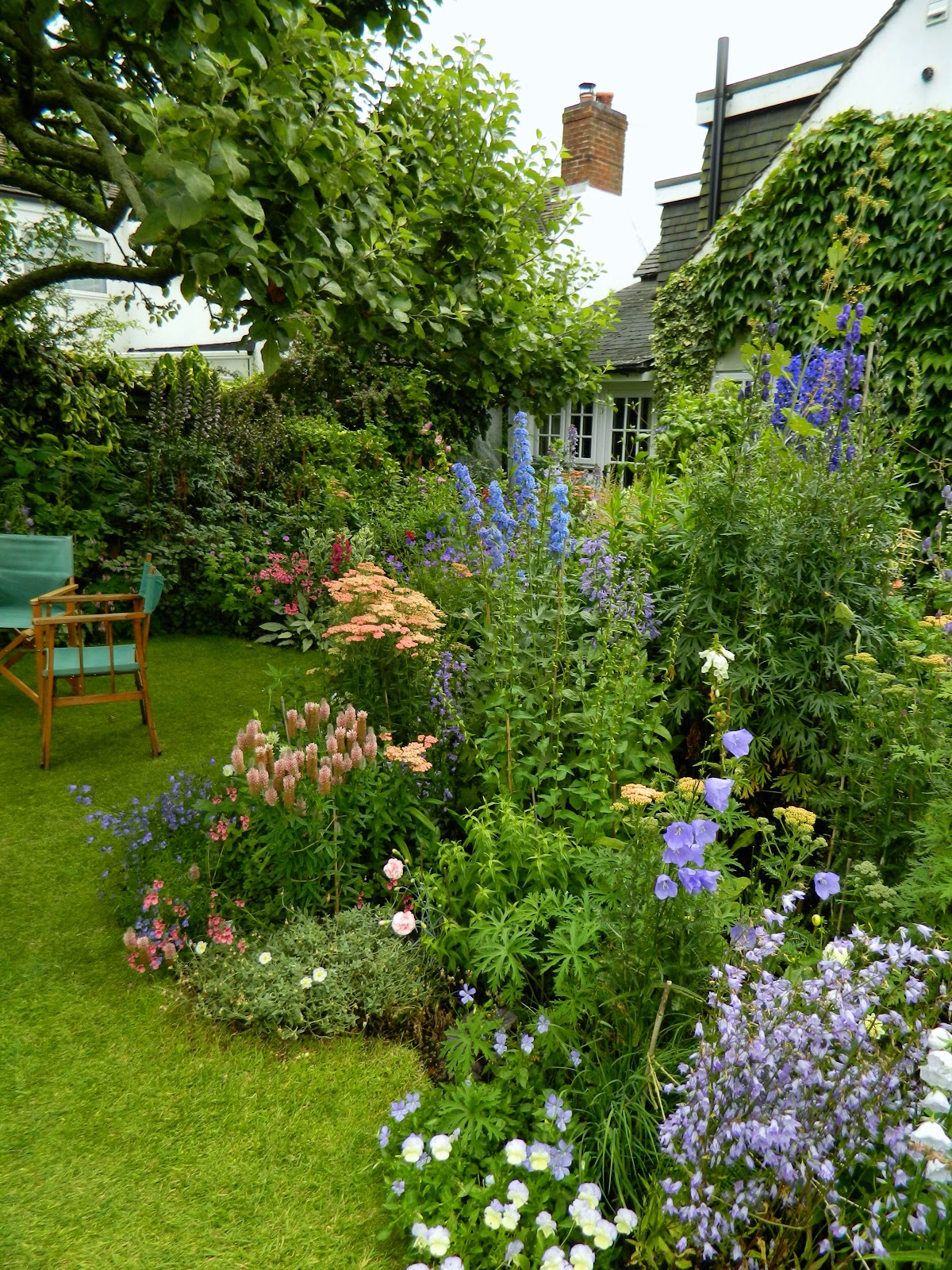 There was a small vegetable plot ... 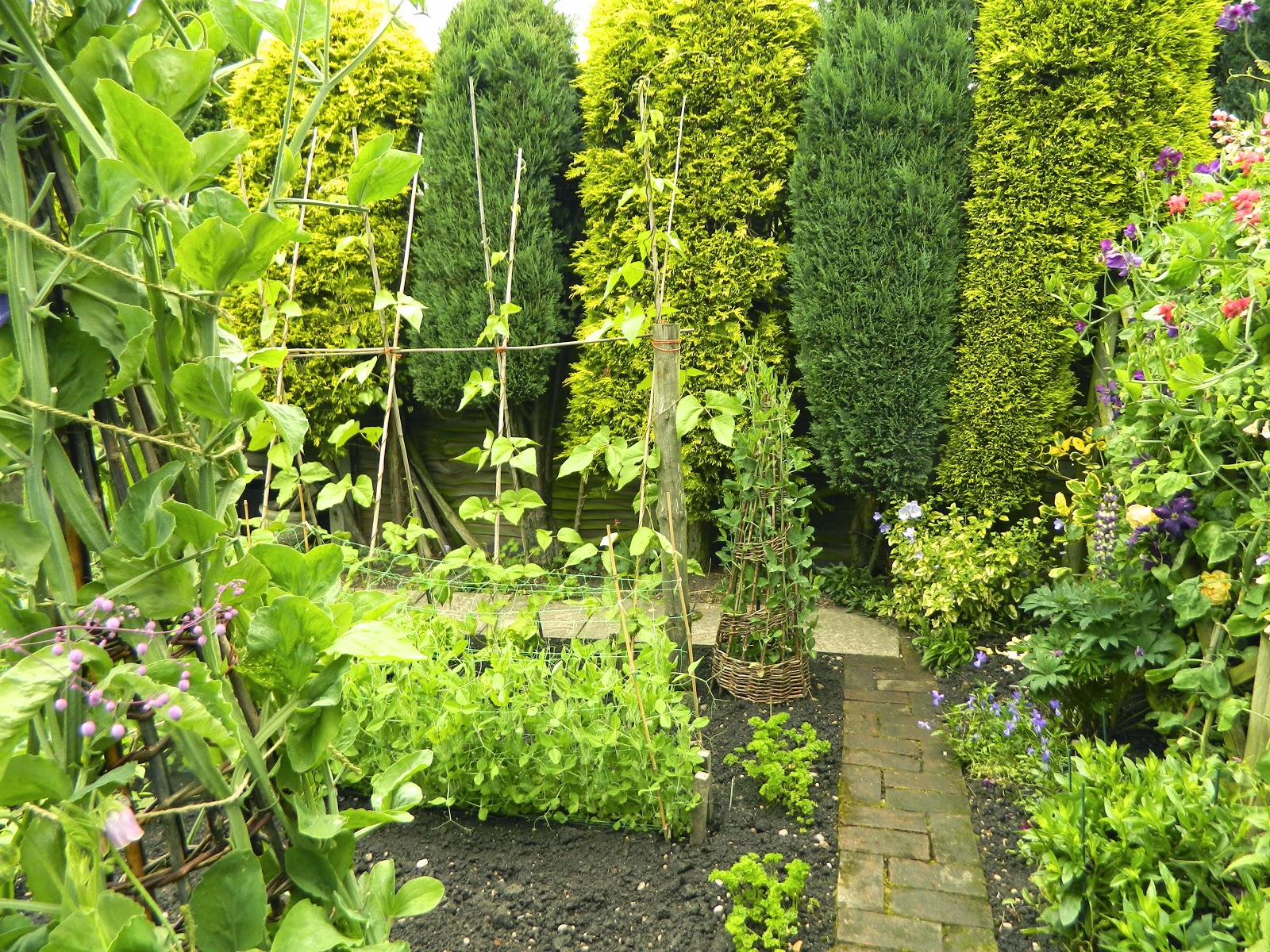 I loved the natural materials used for plant supports in the kitchen garden. 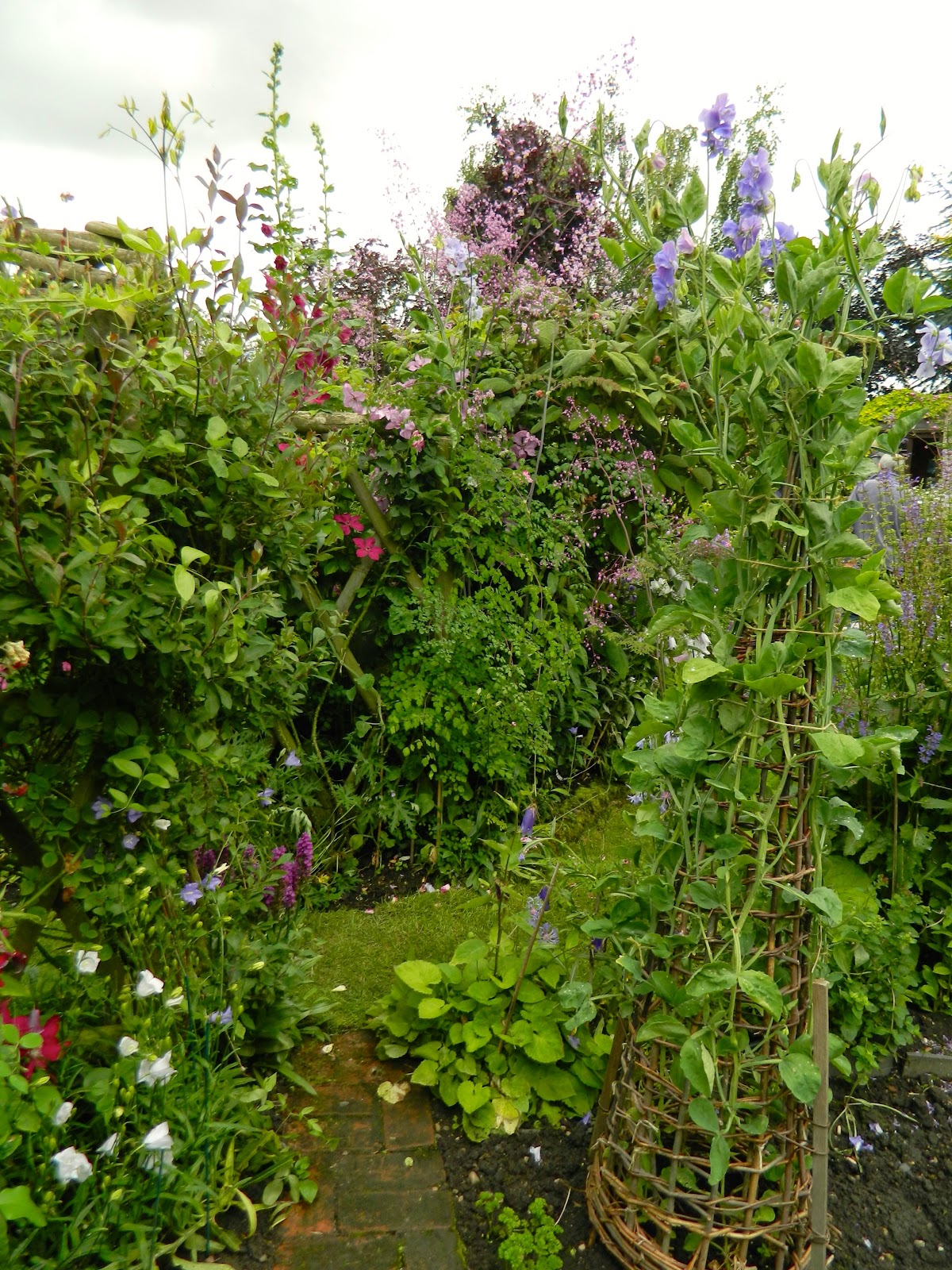 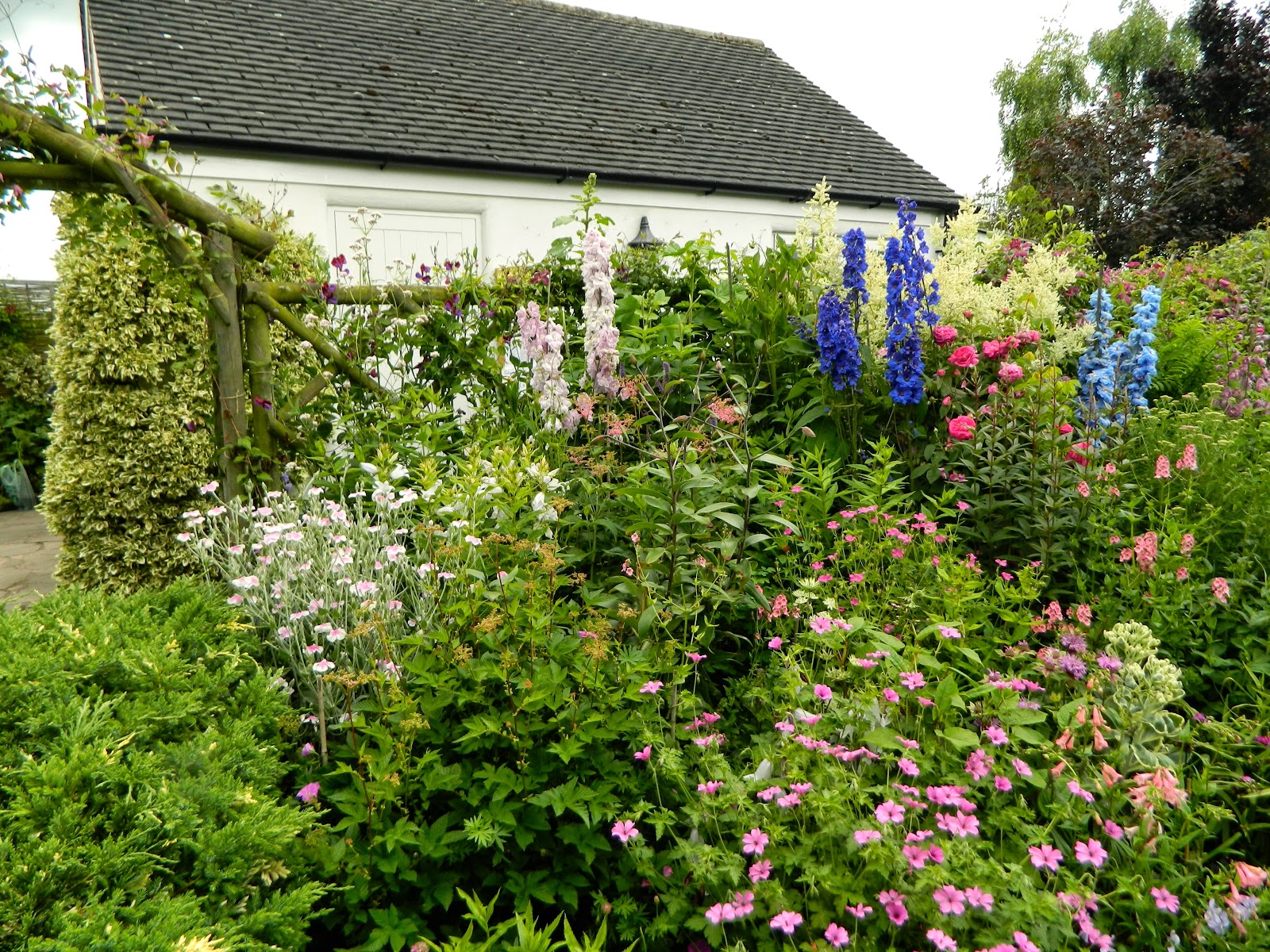 There were surprises around every bend, including  a topiary corner ... 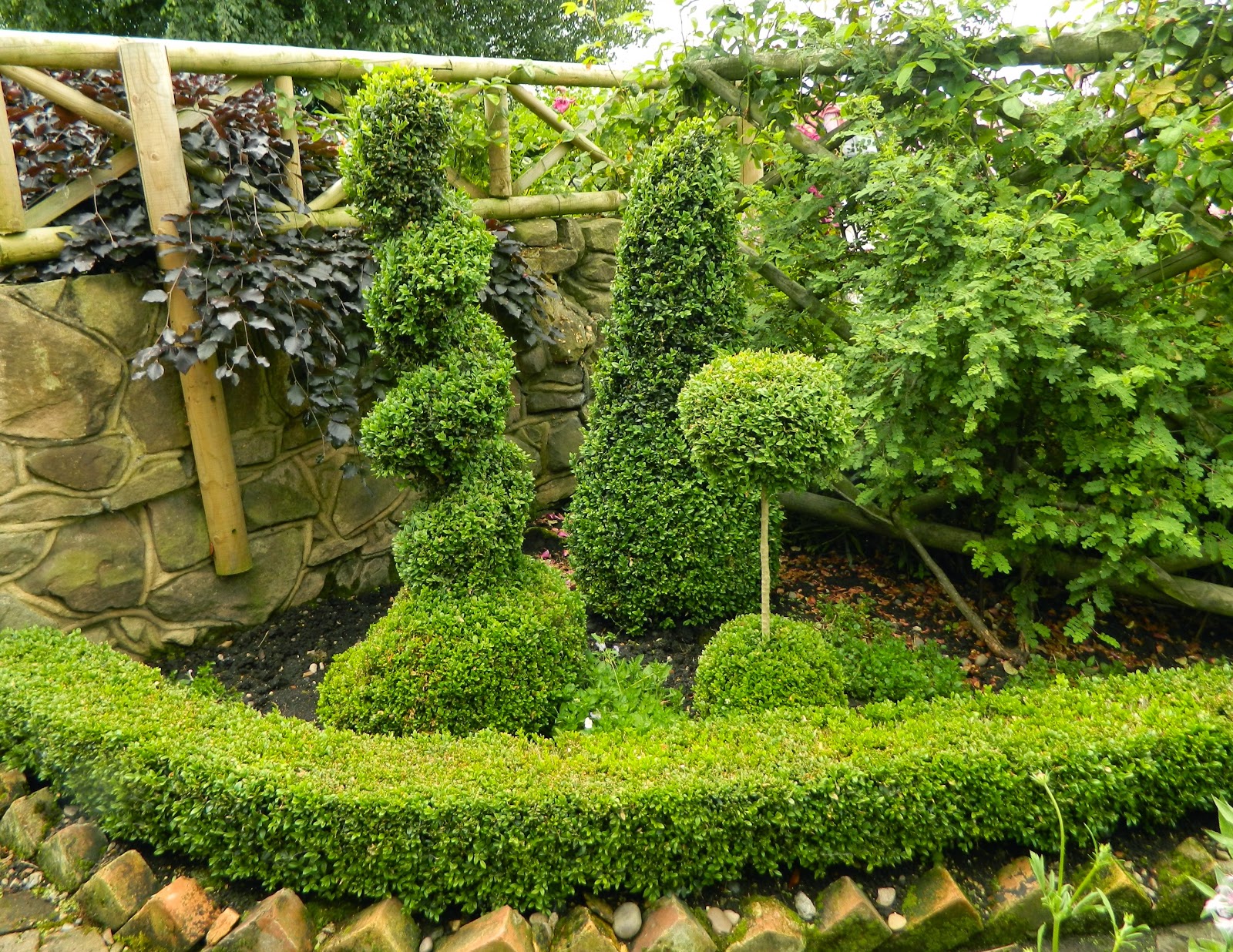 ... and sedum planted atop a stone wall. 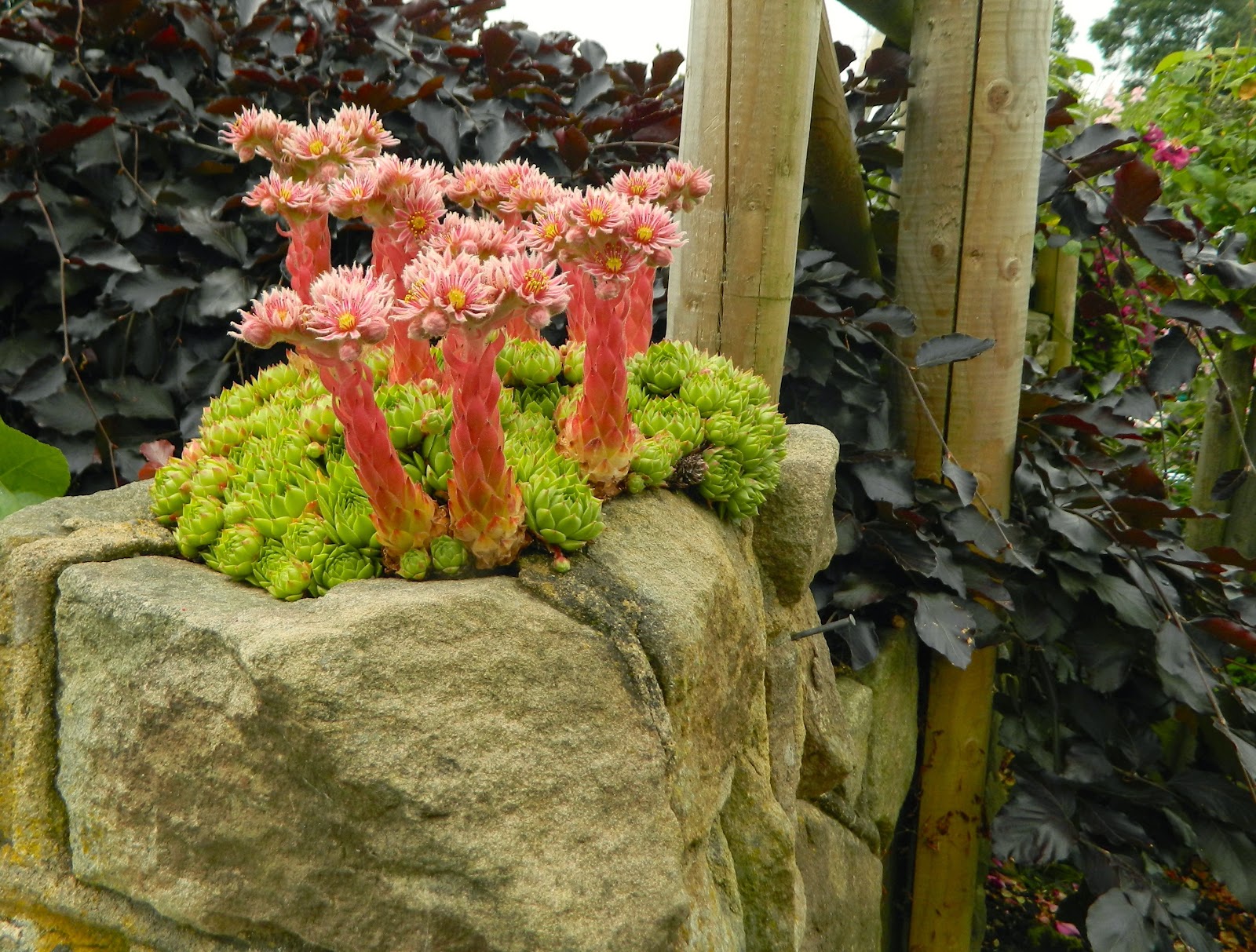 On a little brick patio, there was a delightful grouping of colorful annuals. 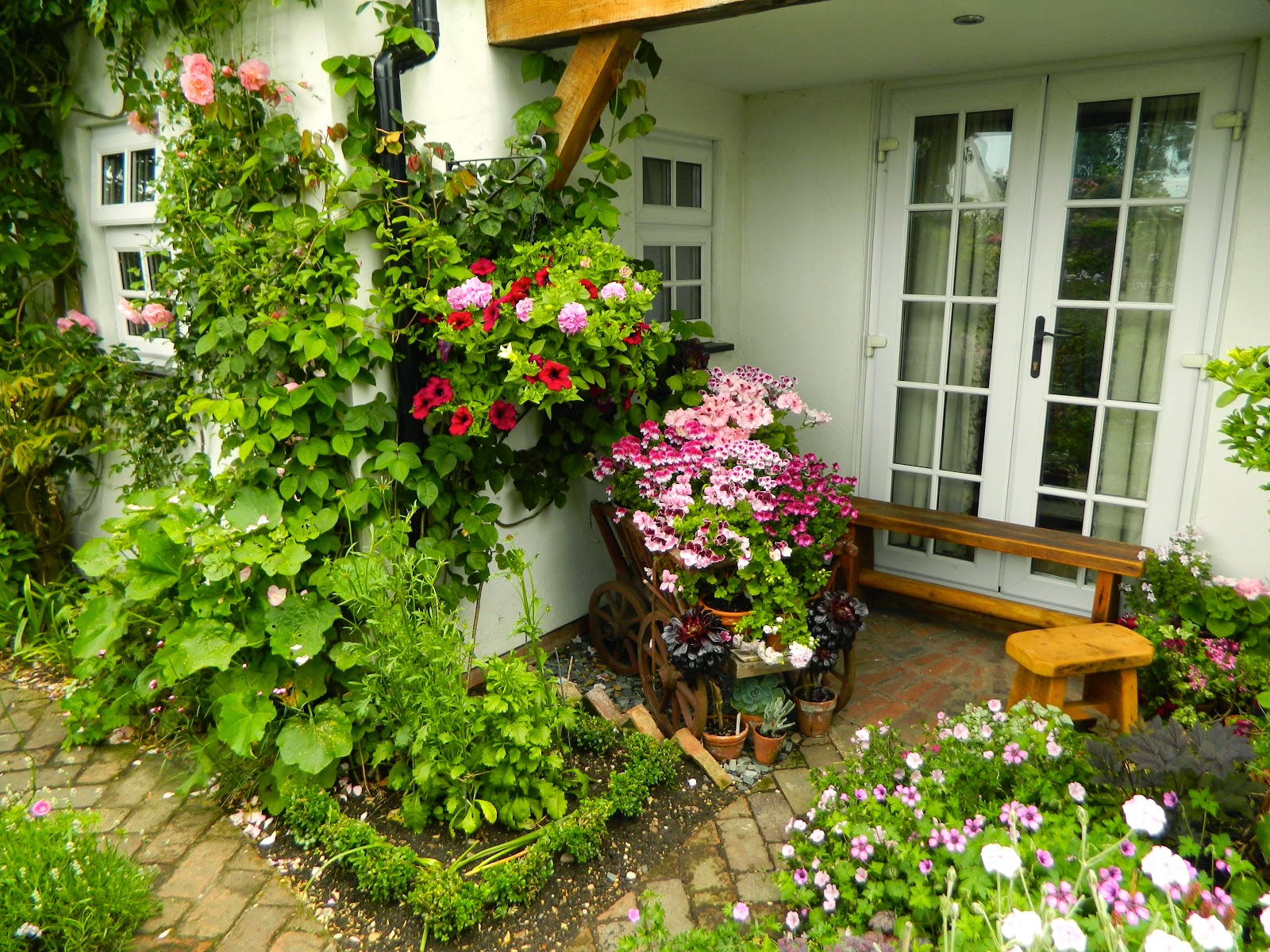 Grafton Cottage has been featured in Gardens Illustrated, local newspapers and on ITV. But nothing could be better than a visit to the garden in June. I hope you enjoyed the tour. 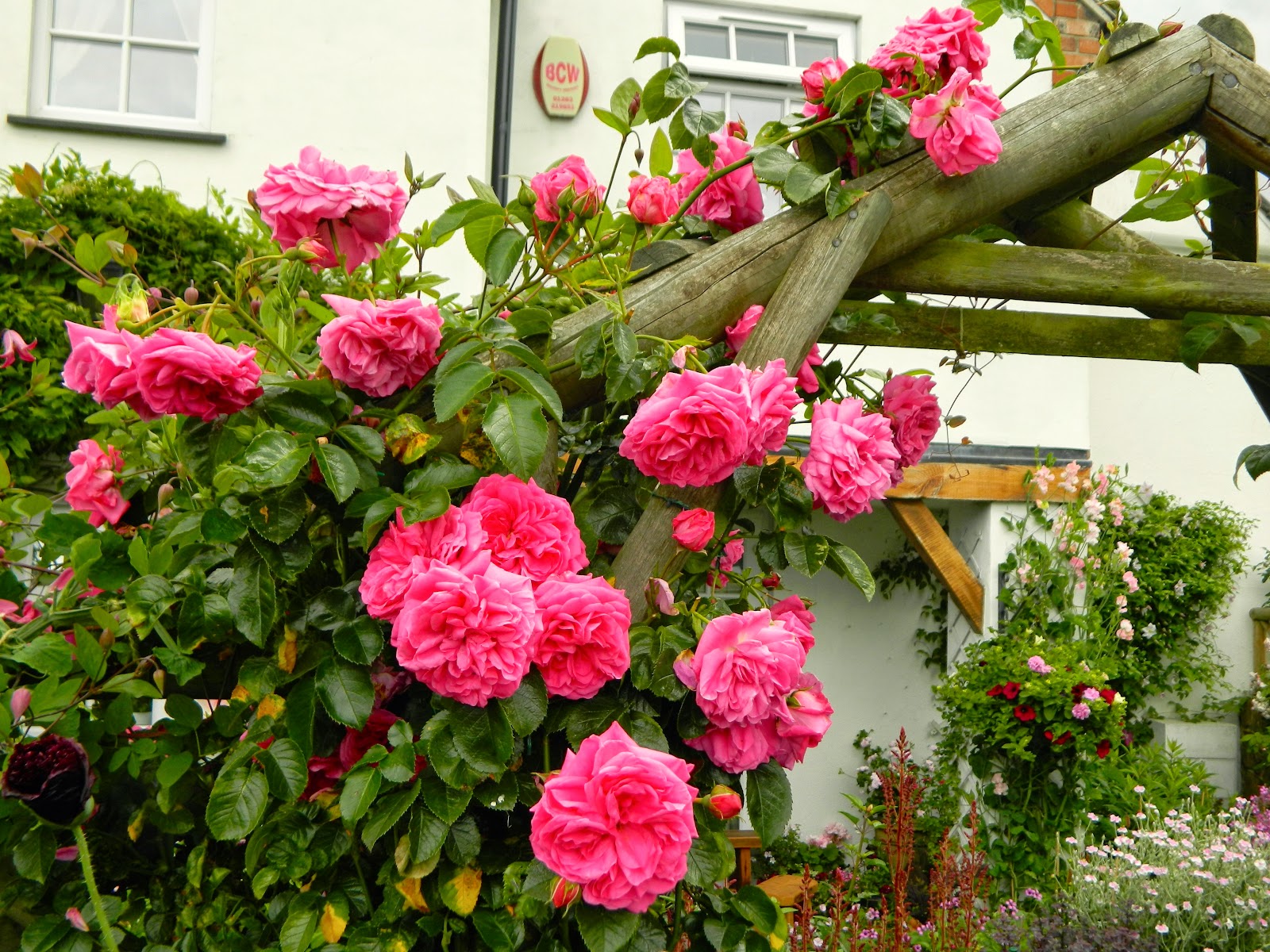 ~~ I love reading your comments. I hope you leave one so I’ll know you visited!
I look forward to visiting your blog in return.
Posted by Pam's English Garden at 10:03 PM 25 comments: 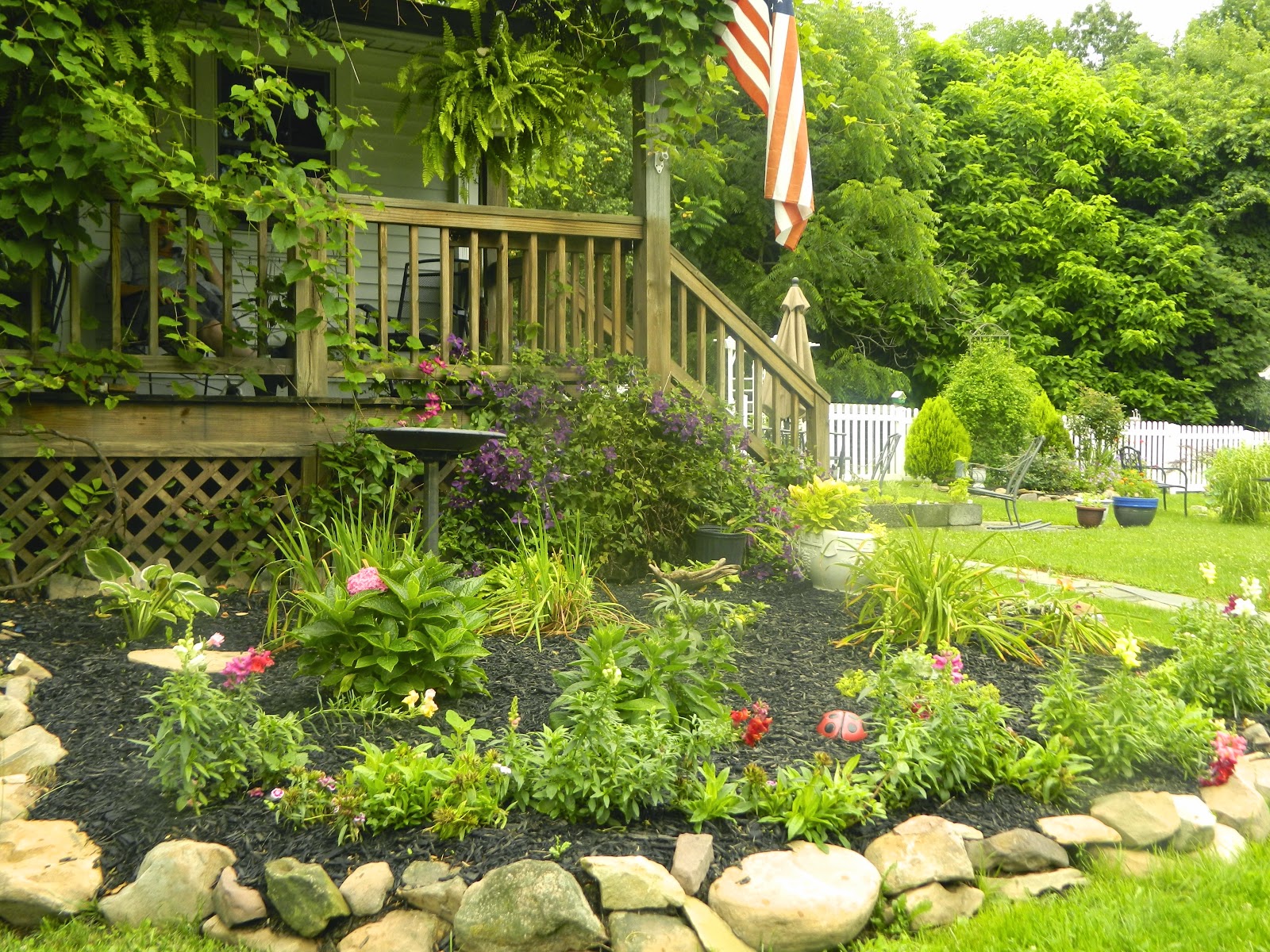 The horseshoe garden, at the foot of the deck, began as a small round flowerbed some ten years ago. I made the original bed using a no-dig method, layering newspaper, compost, peatmoss, and top soil.  I placed a water fountain in the middle and planted catmint, daylilies, and mums for three season blooms. Later I added primula and sweet William.


On a garden tour I saw a plant I had to have. One of the gardens we visited featured the beautiful gooseneck loosestrife, Lysimachia clethroides. When I saw the plant for sale at our local flea market, a few weeks later, I bought two. I planted one in the main cottage garden and one in the round bed. The bees and butterflies loved it.


Gooseneck loosestrife is not invasive like its cousin, purple loosestrife, but never-the-less it is very aggressive. My new plant loved the compost-rich composition of the round bed and eventually it crowded out everything else planted there. 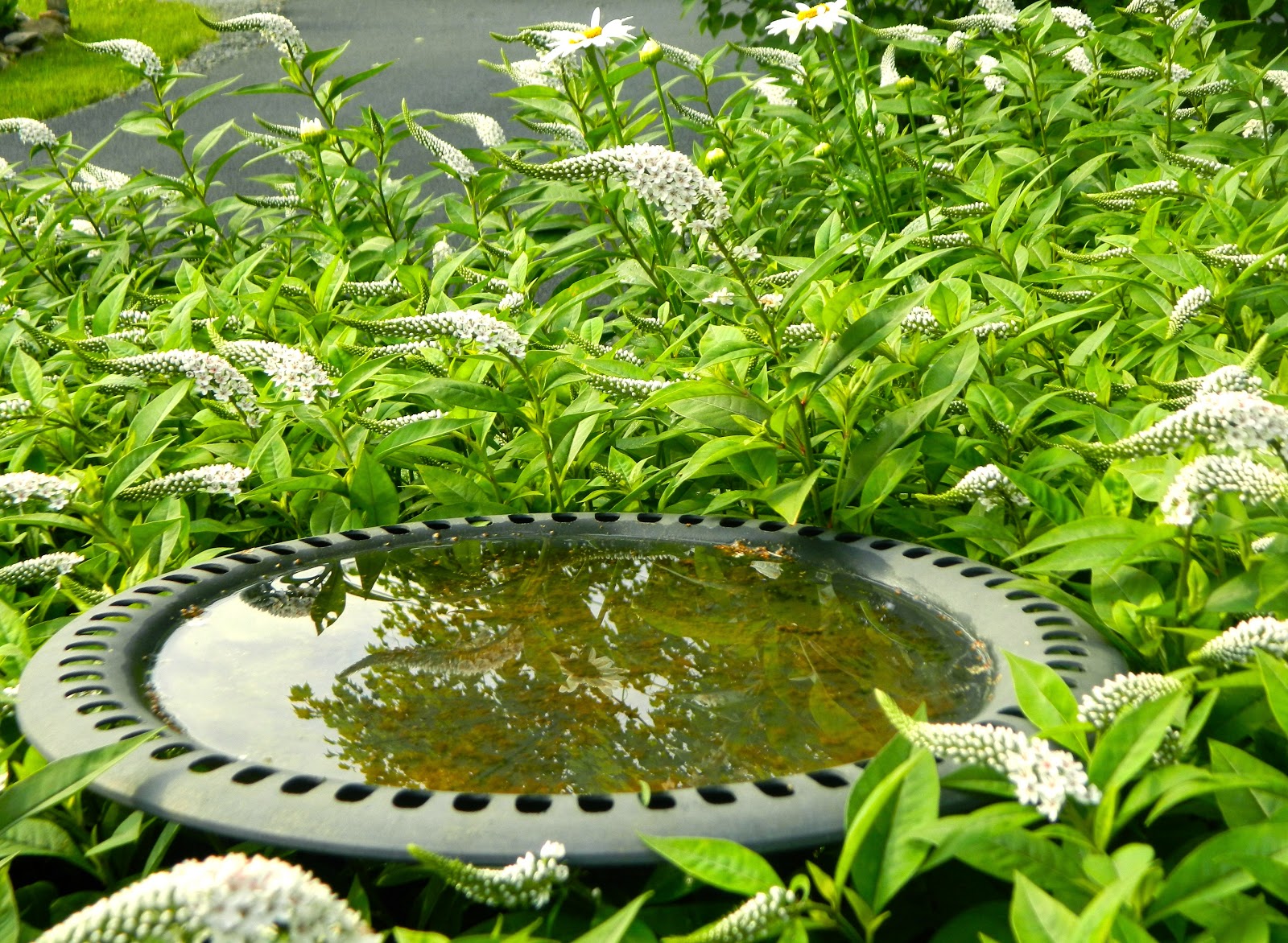 Two years ago, I moved the catmint into the cottage garden. The mum died, leaving the daylilies, primula and sweet William.  Subsequent years, I became tired of pulling out loosestrife each spring from around these remaining plants. I found it impossible to remove gooseneck loosestrife's deep strong roots, so just pulled off the tops.  Last spring, I had enough. When the loosestrife appeared, I saw it was even more pervasive and decided to remove it and rework the bed. I took away the rock surrounding the bed, placed the daylilies, primula and sweet William on one side in pots, and called my helper, Mike, who has a backhoe. It took Mike and two other men, plus the backhoe, several hours to remove all those roots. 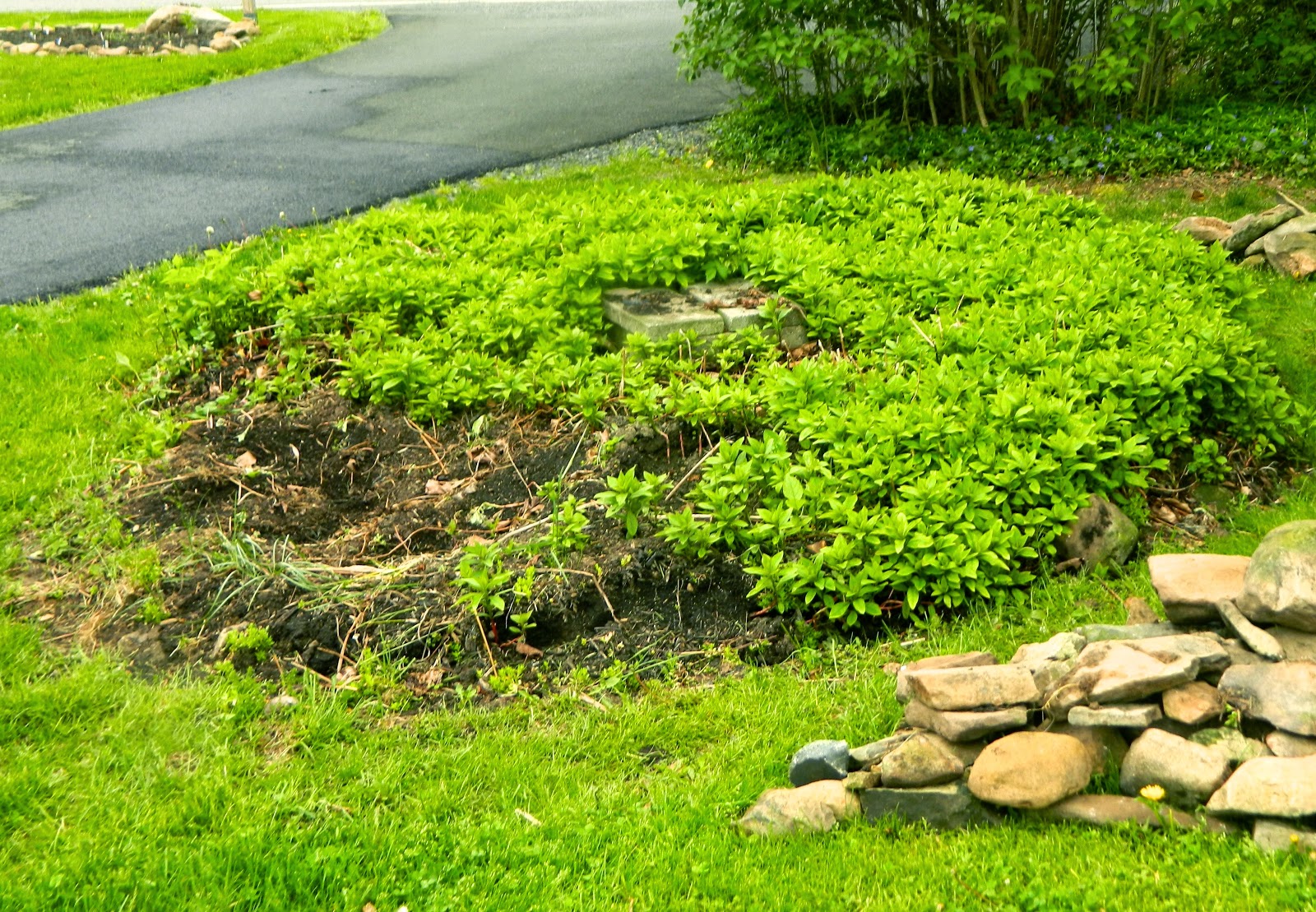 They took out three wheelbarrow loads of the offending plants plus roots. I put the vegetation in black garbage bags, which H.H. placed in a sunny spot at the edge of the top field. I wanted to be sure the plants would die and not spread through the corn field.

Now I could begin from scratch and this was the perfect opportunity to expand the area. Again using the lasagna method, I built a new bed taking it all the way up to the porch trellis. This solved another problem: The path between the round bed and the deck was too narrow for a lawnmower, and the foundation bed was too small for the clematis and grape.

I made the new garden as wide as the deck, surrounding it with rocks. (Gardening in the Poconos means an abundance of rocks.) It looks square in the picture, but actually it is more curved like a horseshoe. H.H. named it The Horseshoe Garden. 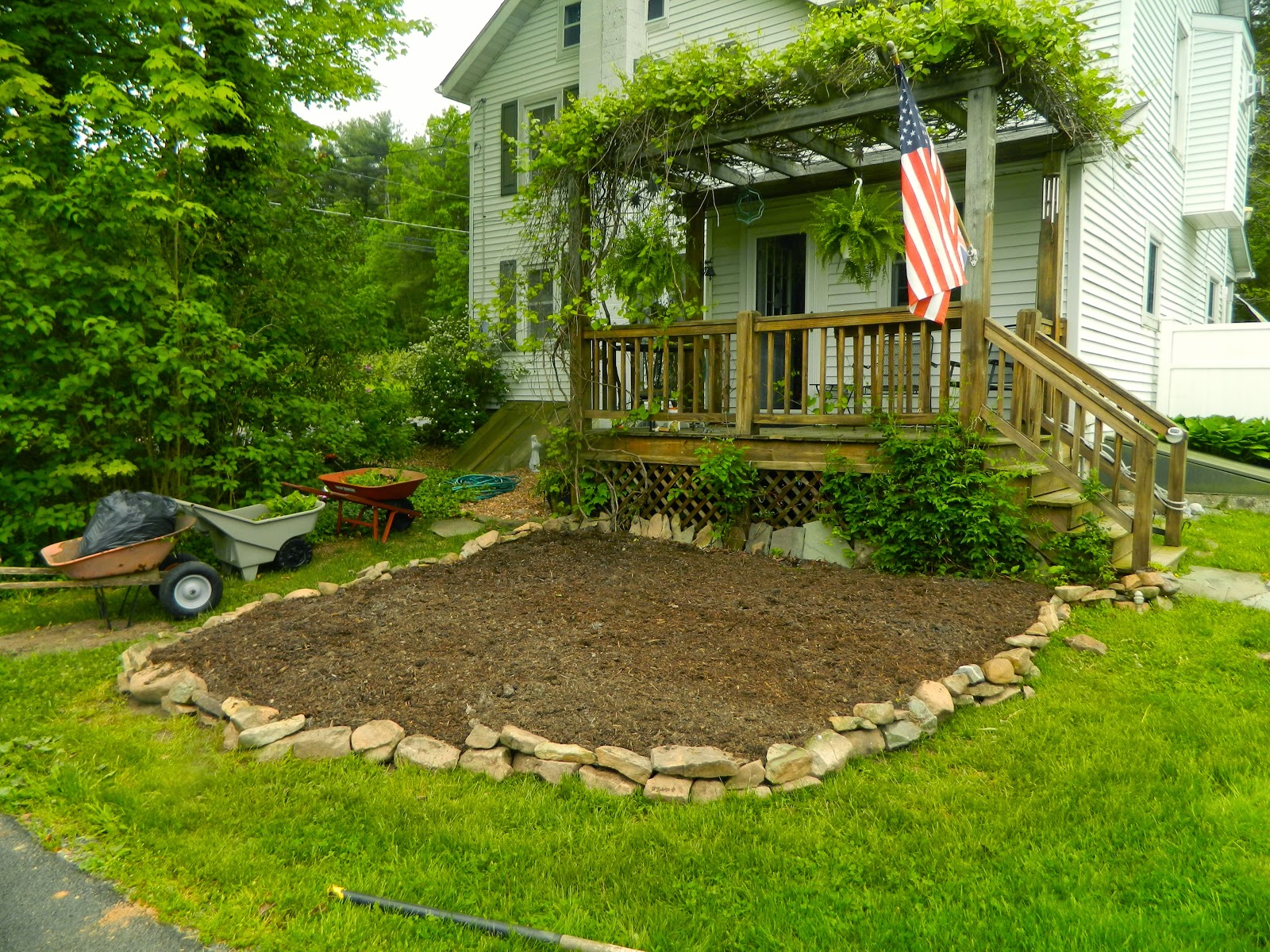 The left side of the horseshoe garden is in dappled shade and the right side has part sun, with full sun in the top right corner. I listed plants for each of these conditions, focusing on native plants. I split up the sweet William and planted it along the front edge, placing the primroses at the back. I put the daylilies on the right side where they would get more sun. I added native plants: hydrangea, ladies mantle, giant blue lobelia, and bearded iris. Also, I planted a hosta and a hellebore. A friend gave me some rose campion from her garden.


When I purchased a new plant I placed it in its pot in the horseshoe bed and left it there for a few days until I was sure it was the right place...


Finally, I added snapdragons that H.H. had grown from seed. They were my best bloomers, blooming through the first frosts. 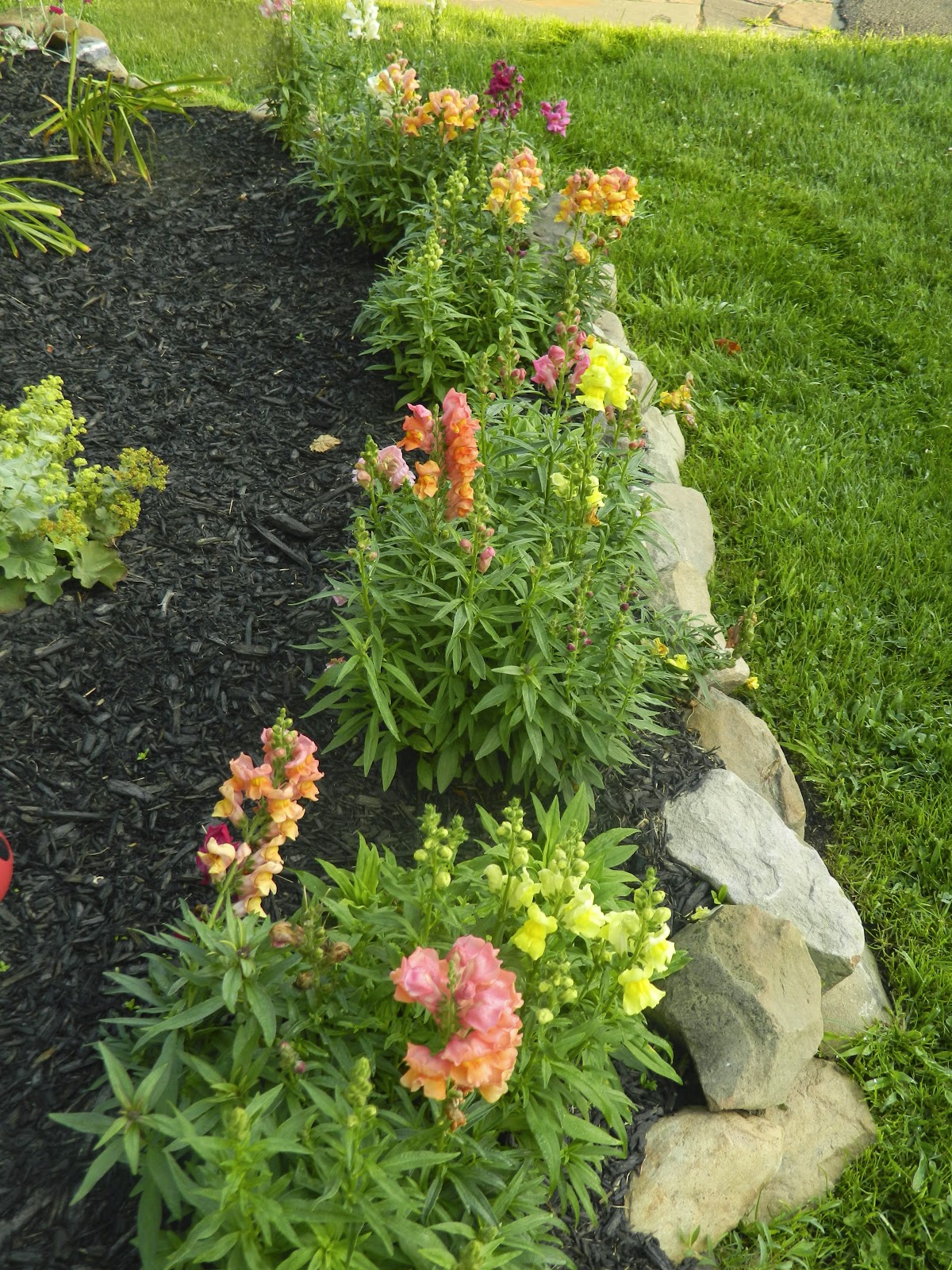 I snaked a soaker hose around the plants and covered it with a layer of mulch.

I am still growing gooseneck loosestrife in the cottage garden area where the soil is less rich, so it has not been so invasive. When I give my beds a top dressing of compost in the spring, I am careful to avoid this aggressive grower.


Did you make any big changes in 2014 or plan one for 2015? I'm pleased with the Horseshoe Garden and look forward to following its progress as the plants fill out.


~~ I love reading your comments. I hope you leave one so I’ll know you visited!
I look forward to visiting your blog in return.
Posted by Pam's English Garden at 11:33 PM 21 comments:
Newer Posts Older Posts Home
Subscribe to: Posts (Atom)