~~ I love reading your comments. I hope you leave one so I’ll know you visited!
I look forward to visiting your blog in return.
Posted by Pam's English Garden at 6:26 PM 22 comments: 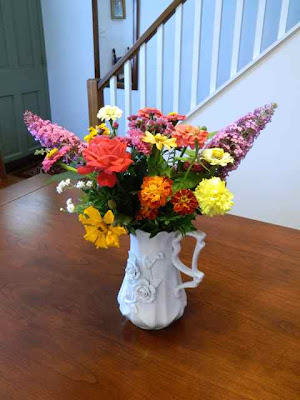 Yesterday, expecting company for dinner, I picked a couple of bouquets for decoration. I placed flowers from my cottage garden on the dining-room table and herbs from my vegetable garden on the kitchen island. I can't think of a more perfect way to display what is blooming in my mid-September garden than by showing you my two bouquets. I have to confess this is not an original idea, as Noelle at Ramblings from a Desert Garden has a Monthly Garden Bouquet post showcasing pictures of bouquets submitted by bloggers. She posts them on the 20th of each month. I urge you to check out Noelle's excellent blog.

I placed my bunch of flowers in a white porcelain jug detailed with embossed-flowers. This beautiful vase was given to me (filled with flowers from her garden) by my dear friend, Karen. It was Karen who introduced me to zinnias several years ago, and they are probably my favorite annual. It is fitting that I have them in her vase now.
My bouquet of herbs was made up of curly parsley, mint, basil, and echinacea. I added nasturtiums for color. There were also some sprigs of flat leaf parsley, but I used them for the salmon spread I made for an appetizer. I placed my bouquet in a small, cut-glass jug. 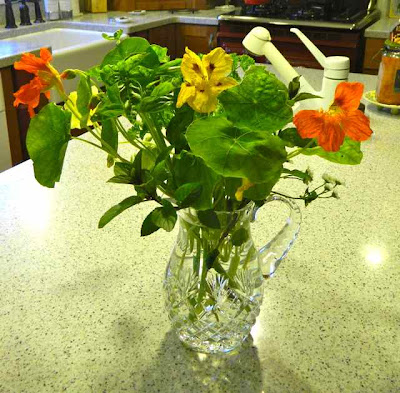 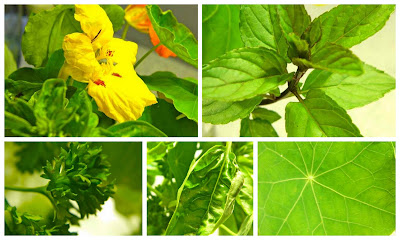 I missed Garden Bloggers' Bloom Day this month, in part because I was without a camera. As you can see, my new one arrived -- these are my first pictures taken with it. I was not able to afford the digital SLR I would have liked, so I settled for an upgrade of my old point-and-shoot (which I loved) and bought a Nikon Coolpix L120. One advantage is a greatly reduced learning curve, so I could begin shooting immediately, but when my ship comes home I would still love to own an SLR.

My garden is not looking its best right now, and I need to do some serious tidying of beds, as everything is flopping all over the place. When my friends arrived yesterday, however, they remarked that I still had quite a bit of color. And you, my gardening friends, can see that color displayed in my bouquets. I am now heading over to Noelle's blog to enter them for her Monthly Garden Bouquet post. I hope you will visit there, too, and consider sending Noelle some pictures. Her only rule is that the flowers are from your garden.

Wherever you are, whatever your season, I hope you are enjoying some beautiful blooms. 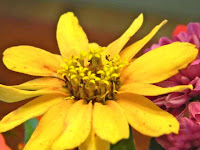 ~~ I love reading your comments. I hope you leave one so I’ll know you visited!
I look forward to visiting your blog in return.
Posted by Pam's English Garden at 8:43 PM 28 comments: 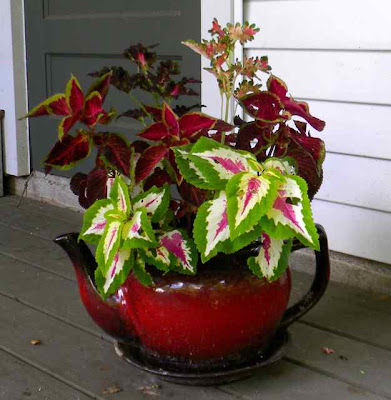 It has been more than a week since Hurricane Irene stormed through our neighborhood, but we still haven't finished clearing up the debris. We lost some trees along the edge of the upper field. None fell on the house, and we are thankful for that. The electricity went off, the basement flooded, and we had no telephone service for two days. Our road was closed for five days because falling trees pulled down electric wires. Now we are being deluged by rain from tropical storm, Lee.  I walked around my gardens, between showers, and thought how beautiful the 'fall' flowers looked -- in spite of the weather -- especially the sweet autumn clematis, the blue mist shrub, and turtlehead. I started taking pictures for the new meme, First Views, by Town Mouse and Country Mouse. I think their idea to show the Big Picture at the beginning of each month is a good one, but my poor, broken camera finally gave up the ghost.  Instead, therefore, I will  show some of my planters. I took photographs of them a couple of weeks ago when my camera was still functioning somewhat. I was inspired to chose this topic by a recent posting from Carolyn's Shade Garden,  Colorful Annuals for Shade. Carolyn shows some amazing combinations of plants.
Large planters filled with elephants ears, papyrus, and lots of dragon wing begonias give my full-sun patio something of a tropical look this year.
My container garden, which we call The Stone Garden, is shaded by maple trees and lilacs, so shade-loving plants are in order. This year, I decided to 'keep it cool' with white and silver flowers and foliage. I chose caladiums, white impatiens, and white begonias.
I added a little color to break the monotony ...
I haven't counted them lately, but I probably have about thirty containers, including hanging baskets and window boxes. I often stick with just one plant in a container. The basket on the gate into the kitchen garden contains petunias, the basket on the gate into the shade garden has peach-colored impatiens. The cone hanging basket contains lantana. On the back-porch are hanging baskets of impatiens and fuschia, and on the deck I have three large Boston ferns. All these are shown in the collage ...
Usually, visitors enter the house via the deck. They are greeted by a cheerful tub of French marigolds. I start marigolds from seed in the house in early spring, moving the seedlings to the potting shed (under grow lights) and plant them liberally in the kitchen garden after the last frost. The planter at the bottom of the steps contains marigolds that were left over after planting the veggie garden ... 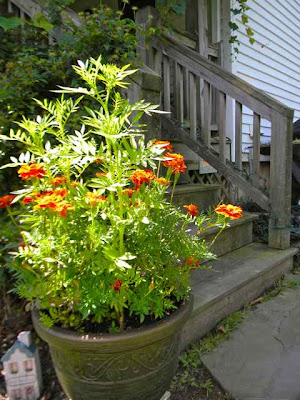 I often use perennials in planters. Two pots of phlox, one pink and one white, are reflected in the mirror at the end of the grassy path, below. I am always trying to detract from that ugly pasture fence.

I start zinnias from seed indoors in early spring like my marigolds.


I use coleus in containers, as well as planting them directly into the shade garden beds. Two large containers are placed on either side of the garage doors. You can see one of them behind the zinnias, above. My favorite container of coleus is the teapot on the back porch, shown in my lead photograph.

With apologies that I didn't devote a posting to September First Views, here are a few pics that I took before my camera died this week. 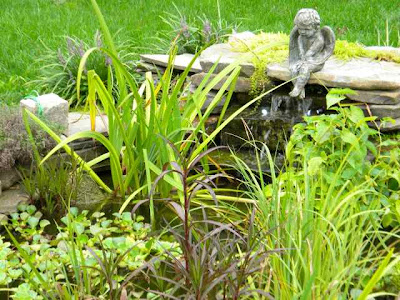 Finally, several hypertufa containers, placed around the pond, are filled with succulents. A frog admires one in the next picture ...


While we have torrential rain, I know some of you are suffering worse weather conditions, including severe flooding in Vermont and wild fires in Texas. I pray for your safety and a rapid return to happy gardening.

~~ I love reading your comments. I hope you leave one so I’ll know you visited!
I look forward to visiting your blog in return.
Posted by Pam's English Garden at 10:52 PM 38 comments:
Newer Posts Older Posts Home
Subscribe to: Posts (Atom)